The epitome of irony.

This reminds me (somewhat) of the Csanad Szegedi case, a former no2 head of the Hungarian fascist Jobbik, who found out that he was Jewish and has since repented. This ‘epic fail’ oversight by the Nazis saved this woman’s life, who has the last laugh.

When Hessy Taft was six months old, she was a poster child for the Nazis. Her photograph was chosen as the image of the ideal Aryan baby, and distributed in party propaganda. But what the Nazis didn’t know was that their perfect baby was really Jewish. 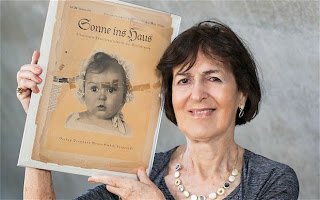 “I can laugh about it now,” the 80-year-old Professor Taft told Germany’s Bild newspaper in an interview. “But if the Nazis had known who I really was, I wouldn’t be alive.”