Gates of Vienna is all over this like white on rice. 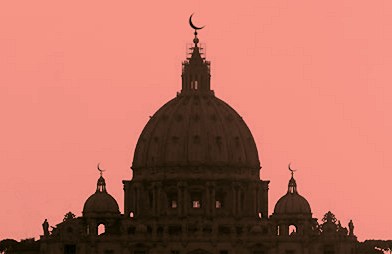 That’s what everyone wanted to know about the notorious 18½-minute gap in Richard Nixon’s Watergate tape, for which Rosemary Woods eventually took the fall.

Now it appears that something similar happened with the Vatican’s tape of the interfaith prayers-for-peace from last Sunday, giving us even more reason to dub this controversy “Imamgate”.

As we reported in last night’s post about the imam’s prayer at the Vatican, there seems to be nothing controversial in the chanted Arabic in the prayer and that spoken in his subsequent remarks. However, a reader and commenter named ritamalik — who is a former Muslim and understands Arabic — tells us that a portion of the video has been edited out, and the omitted section included the verse asking Allah to grant victory over the infidels.

The explanation below is adapted from two separate comments by ritamalik on last night’s post:

You were accurate! Don’t blame yourself! These bastards have cut out the controversial last half-verse from imam’s recitation in the clip. What they have done here is pure and simple censorship, deception and rewriting of history. Pay attention to the clip. They cut his recitation in the middle of the last verse!

I do understand Quranic Arabic very well. I also know Quran itself rather well. I am an ex-Muslim. This link that you have posted was cut! The full recitation from the Quran by this imam that I watched on the Al Arabiya channel two days ago had his recitation up until the final verses, and without a shadow of a doubt he recited the second sura Al Bagharah’s last few verses till the very end where he did say, “and pardon us and forgive us and have mercy on us, you are our guardian, so make us victorious over the tribe of disbelievers [or ‘deniers’, as the word kafir really means]”.