Hopefully thankful that it exists.

H/T: The ever watchful and on point, Doris Wise Montrose.

Imagine the Pope’s horror, knowing this wall is all that stands between the Jews and Palestinian suicide bombers! No wonder he’s praying.
By: Shalom Bear
Published: May 25th, 2014 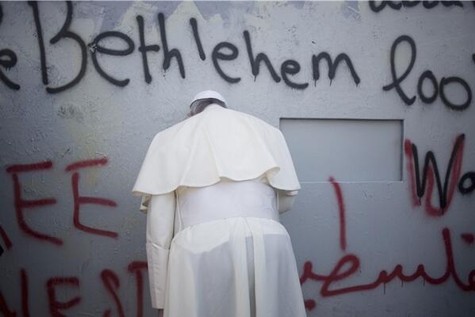 Pope Francis included a stop at the Suicide Bomber Protection Wall during today’s whirlwind tour of Bethlehem, presumably to pray for protection from Palestinian suicide terrorists. The Vatican did not release a statement about the stop, but sources close to the Holy See said the Pontiff was likely checking the last line of defense against Palestinian terrorists before entering Israeli-controlled Jerusalem.

Until this wall was put up, more than 1000 Israelis were murdered and countless more maimed and injured by citizens of the Palestinian Authority.