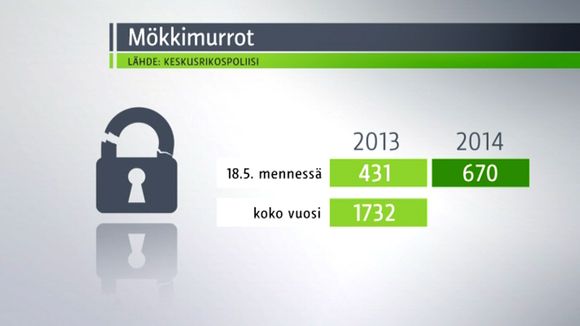 Housing and home burglaries increased significantly – “We have a much more organized , foreign -controlled crime “

Burglaries of homes and cottages have, according to the National Bureau of Investigation , increased considerably in the first half of the year. Break-ins have been made around the country but mostly in southern Finland. In addition to domestic thieves have been foreign criminal gangs, whose share of property crimes are on the rise.

Most burglars enter the apartment through the back door . If the lock is in order, the thief simply fails to enter. Early in the year however, more and more ,  the intruder is able to carry out his intention.

– Latest figures show that there is a clear growth in previous years, so  ​​burglaries were done in inhabited dwellings  and leisure housing , the so -called cabin break-ins, said Heikki Lausmaa of the Police Board in a Yle news broadcast .

According to data collected by the National Bureau of Investigation,  to mid May has been about two and a half hundred burglaries more than a year earlier. Also home  break-ins in the first quarter have increased by almost the same amount.

Break-in growth has surprised the Police

Housing and home break-ins has remained stable for a long time and the steep jump in the figures from the beginning of the year came as a surprise to the police.

– Certainly, the activation has taken place with regard to domestic factors , but, as in previous years, the foreign criminal groups in the proportion of crimes against property in Finland is increasing , Lausmaa Police Board says.

More in Finnish at YLE