Never let facts or inquisitiveness enter into the reporting. 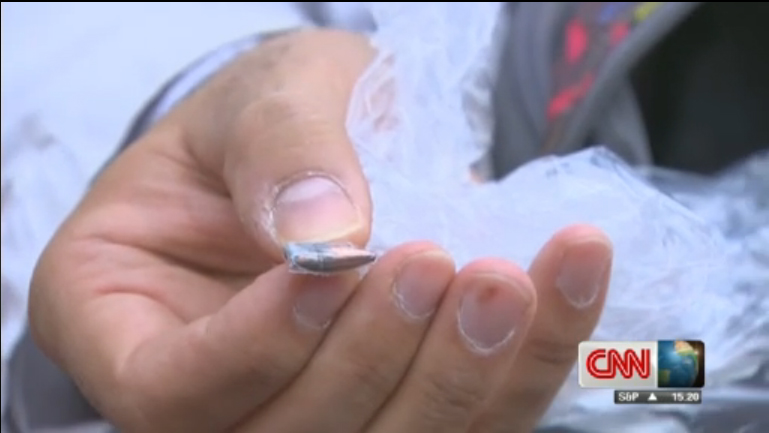 Did this bullet enter and exit a young man’s torso? An Israeli ballistics expert says no. (CNN screenshot)

The deaths of two young Palestinian rock throwers in Betunia in the West Bank on May 15, 2014, has generated a huge amount of attention in part because their deaths were apparently caught on tape.

One video, which was distributed by the Palestinian branch of Defence for Children International (and which has gotten more than 466,000 views on Youtube), shows the two young men falling to the ground.

Brad Parker, a representative of the Defence for Children International Palestine declared that the videos “clearly show two kids being hit directly with something other than a rubber bullet.”

It’s tough to know how Parker can discern what hit the young men, but it is pretty clear that he’s accusing Israeli soldiers of using “live” ammunition against the rock throwers.

This accusation gained further momentum when CNN aired a segment that showed Israeli soldiers shooting in the direction of one of the young men at the time he fell and then pans to a crowd putting him into an ambulance. During the segment the anchorwoman boiled the controversy down as follows:

It comes down to two very different accounts. Israelis say their military was firing only rubber-coated bullets, essentially ball bearings with a thin coating of rubber designed to hurt, but not penetrate. But the video apparently shows the two teens hit with what’s called “live fire,” real bullets that doctors say passed through their bodies, killing them.

During the remainder of the segment, CNN reporter Ivan Watson speaks with Siam Nouwaran, the father of one of the young men who died. During the course of the interview, Watson describes the contents of a backpack he was wearing at the time of his death. “Inside, the backpack, a blood-stained textbook and a bullet, not a rubber-coated projectile.”

The father holds a plastic bag that contains a bullet.

“You think that this is the bullet that killed your son?” Watson asks. “Yeah, of course,” the father answers. “Inside the bag. I found it inside the bag.”

The image of a father holding the bullet that caused his son’s death makes for a compelling story, especially on television.

But is it true?

One Israeli ballistics expert doesn’t think so. Appearing today on Israel’s Channel Two, Yosef Yekutiel stated that if the bullet actually went through the victim’s body the way Palestinian doctors say it did, it would look entirely differently from the one displayed by the boy’s father.

Everyone who understands bullets, knows that the moment it passes through the chest, the torso and hits some sort of bone, it ends up with a distortion. The moment it enters and hits the papers of the books it is expected to be crushed in the front section in a very prominent manner.

Clearly, CNN has some more reporting to do.