Skip to content
Home
/
2014
/
May
/
19
/
Apostates From Islam
/
APOSTATE FROM ISLAM IN GREENS PARTY AGREES WITH HALLA-AHO: TOO MANY IMMIGRANTS IN FINLAND, SHARIA NOT COMPATIBLE WITH WESTERN VALUES AND HUMAN RIGHTS…….
Facebook
Twitter
Google+
LinkedIn
Pinterest

This interview was given by the Greens Party paper, Viheralanka, with one of their party members, Fija Saarni, a Finn with Bosnian immigrant parents (Muslim) who is also an avowed atheist working as an assistant to former True Finns politician, James Hirvisaari.

You’ve said that “Halla-aho is in the eyes of many ‘das Fuhrer’. In my eyes he is just a Finnish man who appreciates Finnish culture.” How can an immigrant be a fan of Jussi Halla-aho?

Halla-aho is an extremely good writer, even though at times too analytical and hostile with people. It’s difficult to disagree with him. There is already enough immigrants. I love Finland, and I hope that there is a frank and comprehensive discussion of immigration here. I am originally from Bosnia, and raised by two Muslims. I feel, however, as an atheist. What would happen to human dignity, if the Muslim population would rise to disproportionate amounts? Among immigrants there is a high incidence of violence against women. Even in Finland there is serious talk of the introduction of Sharia law. This is not compatible with Western values ​​of human rights.

Hirvisaari’s Green assistant: ” An ex-True Finn is also a human being “ 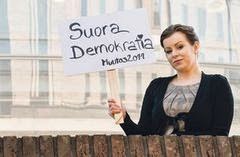 Fija Saarni , you are a member of the Greens , but work for James Hirvisaari   (Muutos2011 ) as a parliamentary assistant . Is there anything odd that a Greens leaves to be an  ex -True Finns’ assistant ?

Ex-True Finns are human. It is difficult to break prejudice. At first, I thought that I couldn’t become an assistant to the “kingdom’s number on rasist”. Coincidentally, Hirvisaari’s former assistant Helena Eronen was a good friend of mine. It was also lucky that Hirvisaari had been reading my blogs and liked them. We can share our views on immigration, and as people can get along very well. I wouldn’t have applied for the post if Hirvisaari would still be in the True Finns.

Why have you not defected to Muutos 2011 , rather, you want to stay a member of the Greens ?

The green has three good reasons: Haavisto, Soini and Tynkkynen . I have been a member of the Greens since the age of 18 , and served in green organizations in Satakunta. I do not feel the need to change the party. I am working at the Parliament because such offers do not come along every day , but I do not feel particularly as a political person. I am interested mainly in migration issues, and I am grateful that I get to work with the Muutos2011 – Party.

What do you think about the fuss surrounding Hirvisaari?

The media has a distorted picture. Hirvisaari is extremely fair, honest and straightforward person. No, of course I don’t agree with him on everything. He likes to provoke. It is his way of contributing to the debate. For example, the equality of marriage, I disagree with my boss. However, I understand the idea of ​​direct democracy. In Hirvisaari’s position, the situation is ok. if the majority of people are for it.

H/T: Kumitonttu who writes: ”Just mind-boggling. a representative of the Muutos (Change) 2011, group dares to call a spade a spade.