Get this, the BBC journo describes calls for reasonable immigration and cracking down on crime as ….”very conservative”. So we should, by default, declare those advocating policies for unfettered mass immigration and being soft on crime (actually looking the other way at it, especially those who are the poster children of their pet projects)…. very leftist/socialist (progressive). 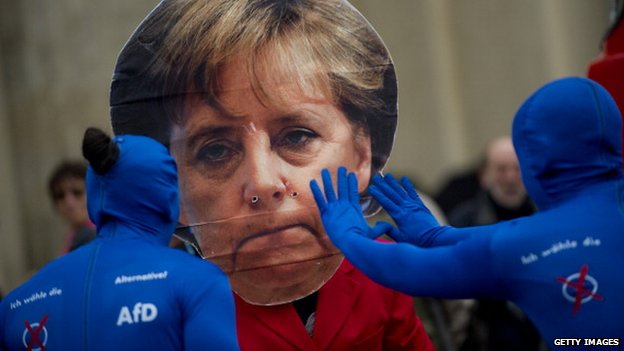 Euroscepticism is taking hold even in the country at the heart of the European project. And one of the continent’s chief Eurosceptics, British politician Nigel Farage, has become an idol to some young Germans – to the consternation of many others.

For rebels, they appear extremely polite, are impeccably dressed and display a distinct lack of piercings or tattoos.

Germany’s Junge Alternative (JA), or Young Alternative, may be dissidents – a Eurosceptic youth movement determined to overturn Germany’s long-standing pro-European orthodoxy – but they are very conservative ones, advocating a crackdown on immigration and crime.

In fact their stance has earned them a particularly bad rap from the national press. In the short year since the group’s launch last June, the JA have repeatedly been accused of being “too far right”, politically regressive and anti-feminist.

The organisation is linked to the country’s first Eurosceptic party in decades, the Alternative fuer Deutschland (AfD), or Alternative for Germany, which wants the euro broken up.

But it remains an independent movement and even the groundbreaking AfD regards it as something of an unruly offspring.

“The media sometimes portray the AfD as far-right and, because we are more direct and more right-leaning than the AfD, we’re seen as extreme-right – but that’s not the image I have of us,” says Sven Tritschler, the JA chairman for North Rhine-Westphalia, Germany’s most populous state.