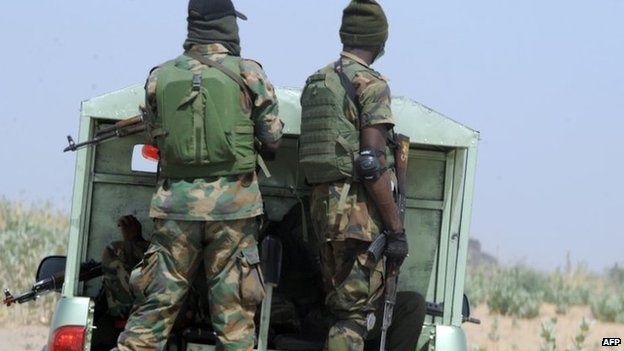 Soldiers say they lack the firepower to tackle insurgents

Soldiers in Nigeria have opened fire on their commander in the north-eastern city of Maiduguri, witnesses say.

Maj-Gen Ahmed Mohammed escaped unhurt after soldiers shot at his car at the Maimalari barracks, the sources said.

The soldiers blamed him for the killing of their colleagues in an ambush by suspected Boko Haram militants.

Meanwhile, Nigeria’s president has ruled out freeing Boko Haram prisoners in exchange for the release of more than 200 kidnapped schoolgirls.

The Nigerian government has said it is ready to open talks with Boko Haram, but it is now becoming clear there are red lines the government will not cross.

The prisoner swap is the principal demand made by the leader of the Islamists, Abubacar Shekau, so it is not clear what any talks would be about.

Visiting British minister Mark Simmonds drew another red line. He said that once the crisis was over, it was important there was no impunity for those who had committed this criminal act.

In other words, Abubacar Shekau and other Boko Haram members involved in the kidnapping should be arrested. These red lines will make holding any sort of talks between the Nigerian government and Boko Haram very difficult, to say the least.

A government minister had earlier said authorities were ready to negotiate with Boko Haram, but President Goodluck Jonathan insisted on Wednesday that this was out of the question.

“He made it very clear that there will be no negotiation with Boko Haram that involves a swap of abducted schoolgirls for prisoners,” said British Africa Minister Mark Simmonds after meeting Mr Jonathan in the capital, Abuja, to discuss an international recue mission for the girls.

Their kidnapping in Borno state on 14 April has caused international outrage, and foreign teams of experts are in the country to assist the security forces in tracking them down.