Remember folks, the jihad is all about the spreading, and institutionalization, of the 7th century Islamic legal system called sharia.

NOTE: Does this statement by A.I., that sharia is a ‘dark ages’ legal system, make the supposed humanitarian organization….. Islamofauxbic? 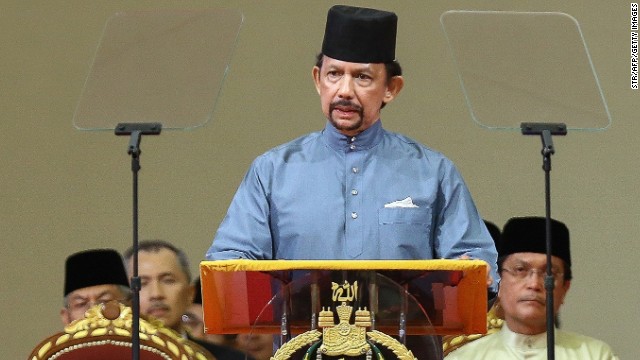 Brunei’s Sultan Hassanal Bolkiah delivers a speech during the official ceremony of the implementation of sharia law.
STORY HIGHLIGHTS

The Islamic criminal law is set to include punishments such as flogging, dismemberment and death by stoning for crimes such as rape, adultery and sodomy. The religious laws will operate alongside the existing civil penal code.

During a ceremony Wednesday morning, the Sultan of Brunei, Hassanal Bolkiah, announced the commencement of the first phase of the sharia-based penal code, according to the government’s official website.

The oil-rich kingdom, located on the island of Borneo, has a population of just 412,000 people. The country already follows a more conservative Islamic rule than neighboring Muslim-dominated countries like Indonesia and Malaysia, and has implemented strict religiously-motivated laws, such as the banning of the sale of alcohol.roup aims to enforce Sharia law

“It (the law) makes a mockery of the country’s international human rights commitments and must be revoked immediately,” Amnesty’s regional deputy director Rupert Abbott said in a statement released after the announcement.

Most parts of the new Islamic code will apply to both Muslims and non-Muslims, affecting people from the Christian and Buddhist communities. Around 70 percent of people in Brunei are Malay Muslims, while the remainder of the population are of Chinese or other ethnic descent.