Now becoming just another voice in the din of other minority special rights groups.

And it’s these same Swedish speaking Finns who champion ”multiculturalism” as a means in keeping their minority identity alive. Fat chance as other groups vie for the same coveted special priority status they’ve (Finn-Swedes) enjoyed over the years. 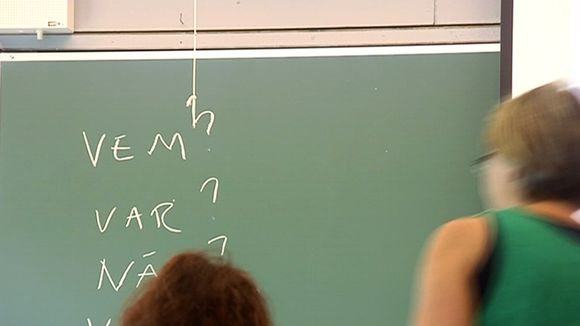 A Swedish lesson in a Finnish-language school; but native speaker numbers have been dwindling for 40 years. Image: Yle

A historical first was reached on Thursday, when population data revealed that Finland now contains more speakers of foreign languages than it does Swedish speakers.

Preliminary figures from Statistics Finland show that a slight surge in immigration boosted Finland’s population by 3,800 people at the start of the year, bringing the number of speakers of foreign languages to 293,540 – or 5.4 percent of the population.

This is compared to 290,760 Swedish speakers, who make up 5.3 percent of the population.

Irma Pitkänen from Statistics Finland said that the moment of the overtaking itself came as a surprise, despite the trends of the changing populations having been visible for some time.

“The size of the Swedish speaking population has been going down very slowly, from about 6 percent of the total population about 40 years ago,” Pitkänen said. “Meanwhile immigration has been growing at a faster rate, since the start of the 90s. So we knew that this change was going to happen, but we didn’t know when,” she added.