How could it have ended any differently?

The late great US president, Ronald Reagan, vigorously opposed the building of the trans Siberian oil pipeline to Europe, knowing full well that that oil would result in a weakened Europe in Soviet/Russian relations. We know all too well, from past experience, that the EU will not formulate anything in the way of a tough response to Russian aggression.

NOTE: That said,with Neo-Nazis running rampant in the Ukraine opposition (h/t: Vlad), I really do not find any one credible to deal business with (the EU hasn’t a problem though). Talk about being compromised. 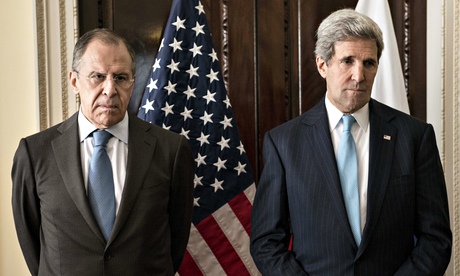 The Ukraine crisis has entered a new and more dangerous phase after 11th-hour talks in London between the US secretary of state, John Kerry, and his Russian counterpart, Sergei Lavrov, broke up without resolution.

The diplomatic failure sets Russia on a collision course with the west, with Moscow ordering further military deployments on Friday and a contentious referendum in Russian-dominated Crimea set to go ahead as planned on Sunday.

The referendum, which will almost certainly result in a vote in favour of breaking away from Ukraine and union with Russia, will trigger the imposition of sanctions by the west on Monday.

During five hours of talks, Kerry pushed Lavrov to postpone the referendum. He challenged him over sudden Russian troop movements along the Ukrainian border over the last few days. But Lavrov offered nothing in the way of a concession that would have helped reduce tensions.

At a press conference afterwards, the Russian foreign minister described the talks as productive, in that both sides were able to set out their positions, but the two sides did not share “a common vision”. Looking for a way to emphasise his point, Lavrov sought an international parallel: Crimea meant more to Russia than the Falklands did to Britain.