Erdogan and his company of fellow fundamentalist Muslims are up to their ears in provoking and terrorizing the street, as well as on the high seas. 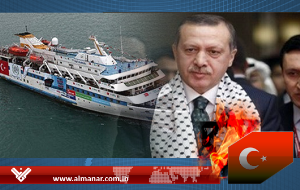 Turkish Prime Minister Recep Tayyip Erdoğan on March 13 accused his opponents, including politicians, media and businesspeople of trying to stir up chaos ahead of key local elections later this month.

“They are trying to get results by provoking and terrorising the streets,” Erdoğan said, a day after clashes erupted in Turkey as tens of thousands took to streets to mourn a 15-year-old Berlin Elvan who died from injuries suffered in anti-government protests last year.

Erdoğan said demonstrators had destroyed the offices of his ruling Justice and Development Party (AKP) in Istanbul, and lashed out at what he called “ugly attempts” to manipulate March 30 elections.

“They are trying to get results by provoking and terrorising the streets,” he said.

“They are charlatans, they are not honest. They have nothing to do with democracy,” he added. “They do not believe in the ballot box”.