As long as he keeps his bootheel upon the neck of the Muslim Brotherhood, he can have the presidency for life. 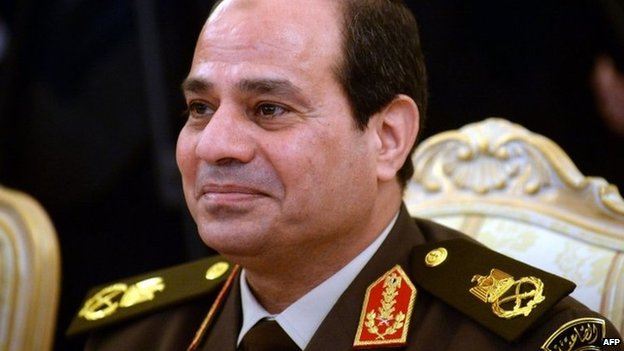 The field marshal is widely expected to become president of Egypt, the most populous Arab nation

Egypt’s armed forces chief, Field Marshal Abdul Fattah al-Sisi, has said he cannot ignore calls by the majority for him to run for president.

He was quoted by the state news agency Mena as revealing that “official procedures” regarding his candidacy were expected in the coming days.

It is the clearest indication yet that he will stand in the election which is scheduled to take place by mid-April.

He led the overthrow of President Mohammed Morsi in July.

The field marshal has been widely expected to resign and declare a presidential bid since the Supreme Council of the Armed Forces (Scaf) gave its public support at the end of January.

Correspondents say he would be likely to win, given his popularity and the lack of any serious rivals.

Field Marshal Sisi commented on his prospective candidacy in a speech at a graduation ceremony at the Egyptian Military Academy in Cairo.