Aye, she is indeed. 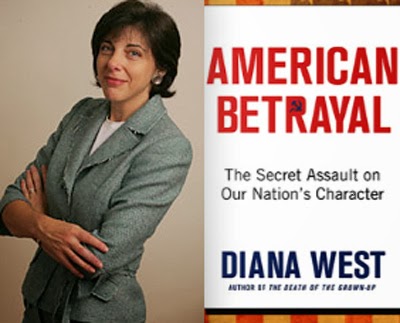 Diana West is a best selling author and nationally syndicated columnist. I first became aware of her with her “The Death of the Grown-Up,” which examined American culture in an age of infantilism.

Her most recent book is “American Betrayal: The Secret Assault On Our Nation’s Character.” It generated a firestorm of controversy on the right and, eventually, throughout the political spectrum for its well researched but unwelcome conclusions that America had been infiltrated to a far greater degree by agents of the USSR than previously known or publicly admitted. It can be purchased by clicking here.

Perhaps the best, most concise exegesis of her book was the overview of it on the Barnes & Noble website:

“Part real-life thriller, part national tragedy, American Betrayal lights up the massive, Moscow-directed penetration of America’s most hallowed halls of power, revealing not just the familiar struggle between Communism and the Free World, but the hidden war between those wishing to conceal the truth and those trying to expose the increasingly official web of lies.

American Betrayal is America’s lost history, a chronicle that pits Franklin Delano Roosevelt, Harry Truman, Dwight David Eisenhower, and other American icons who shielded overlapping Communist conspiracies against the investigators, politicians, defectors, and others (including Senator Joseph McCarthy) who tried to tell the American people the truth.

American Betrayal shatters the approved histories of an era that begins with FDR’s first inauguration, when “happy days” are supposed to be here again, and ends when we “win” the Cold War. It is here, amid the rubble, where Diana West focuses on the World War II—Cold War deal with the devil in which America surrendered her principles in exchange for a series of Big Lies whose preservation soon became the basis of our leaders’ own self-preservation. It was this moral surrender to deception and self-deception, West argues, that sent us down the long road to moral relativism, “political correctness,” and other cultural ills that have left us unable to ask the hard questions: Does our silence on the crimes of Communism explain our silence on the totalitarianism of Islam? Is Uncle Sam once again betraying America?

In American Betrayal, Diana West shakes the historical record to bring down a new understanding of our past, our present, and how we have become a nation unable to know truth from lies.”