The Islamonazis will melt it down for shrapnel to be used against Israeli civilians.

The Islamonazis of the waqf have routinely destroyed ancient artefacts illegally dug up on the Temple Mount, so you can rest assured the statue won’t end up well, unless enough ransom money is paid for it.

UPDATE: Commenter Will reports: Found out a little bit more about it, seems the statue was found in Sept, they want 20-40 $ million for it. Lots of grenades. 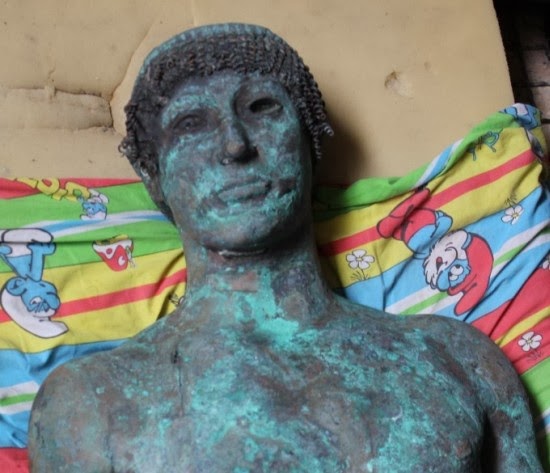 Lost for centuries, a rare bronze statue of the Greek god Apollo has mysteriously resurfaced in the Gaza Strip, only to vanish almost immediately from view and be taken into police custody.

Word of the remarkable find has caught the imagination of the world of archaeology, but no one knows when the life-sized bronze might re-emerge or where it might be put on display.

A local fisherman says he scooped the 500-kg God from the seabed last August, and carried it back home on a donkey cart, unaware of the significance of his catch.

Others soon guessed at its importance, and the statue briefly appeared on eBay with a $500,000 price tag — well below its true value. Police from the Islamist group Hamas, who rule the isolated Palestinian territory, swiftly seized it and say they are investigating the affair.

To their great frustration, archaeologists have not yet been able to get their hands on the work of art, and instead are relying on a few blurred photographs of the virtually intact god, laid out incongruously on a blanket emblazoned with Smurfs cartoon characters.