Islam is a PUBLIC SQUARE ideology.

It effects every aspect of life, not just for the followers of the desert cult, but for non-followers as well. That is what we are trying to warn fellow Westerners about, the dangers of playing with it, like with fire, will end up burning you. There is no such thing as just ”a little bit of sharia”, any more than there’s such a thing as just ”a little bit of garlic”. 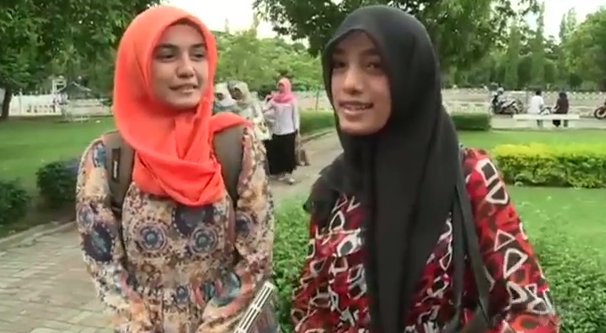 Women in Aceh must always wear a scarf in public

The government of Indonesia’s Aceh province has approved a new law obliging every citizen to follow the sharia Islamic legal code regardless of their religion.

Councillor Abdulah Saleh told the Jakarta Post that the new behaviour law, or qanun jinayat, “does indeed oblige everyone in Aceh to follow sharia without exception.”

Saleh said that the qanun stipulated that all those found to have violated sharia would be tried under Islamic law regardless of their religion.

Non-Muslim violators of Indonesia’s national ciminal code (KUHP) will be given the option to choose between a sharia court or a regular court – but both courts will adhere to islamic legislation.

“If the violation committed by a non-Muslim is not regulated in the KUHP then the violator will automatically be tried in a sharia court, without exception” Saleh continued.