This undated image posted on a militant website on Tuesday, January 14, 2014 shows fighters from the al-Qaeda linked Islamic State of Iraq and the Levant (ISIL) marching in Raqqa, Syria. (photo credit: AP/militant website)

Al-Qaeda-linked rebels in Syria beheaded a man in front of a crowd that included children, according to the Britain-based Syrian Observatory for Human Rights monitoring group.

In an amateur three-minute video posted online by the Observatory over the weekend, armed men dressed in black stand around a man, reportedly a Shiite pro-regime fighter, lying in the grass. One of the armed militants takes out a small knife, and cuts off the head of the captive as the assembled crowd cheers.

The rebel holds up the decapitated head, then places it on the victim’s back before it rolls off onto the grass. 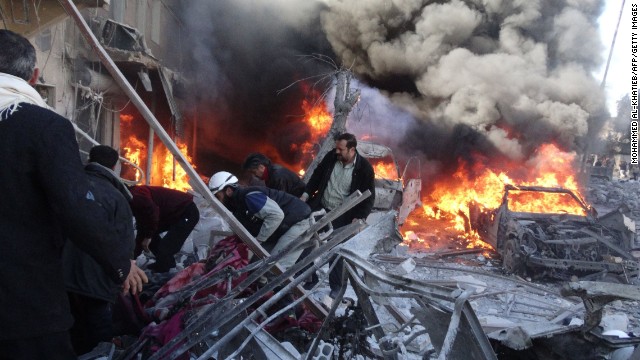 Medical personnel look for survivors after a reported airstrike in Aleppo, Syria, on Saturday, February 1. The United Nations estimates more than 100,000 people have been killed since the Syrian conflict began in March 2011. Click through to see the most compelling images taken during the conflict, which is now a civil war:

(CNN) — Ninety people were killed in a day of punishing air assaults on Aleppo as so-called barrel bombs rained down on the city, an opposition group said.

Women and children were among the victims in Saturday’s raids in various neighborhoods in the rebel stronghold, the UK-based Syrian Observatory for Human Rights said Sunday.

It added that 10 fighters from the radical Nusra Front were killed when their headquarters were targeted. Nine people were killed near Aleppo’s central prison, it said.

Barrel bombs — drums packed with explosives and shrapnel — can level entire buildings with one hit.

Many killed in Yemen as Houthi separatists gain ground

Sanaa – After weeks of clashes that have left many dead and wounded, Houthi separatist rebels have managed to dislodge powerful tribes from areas of northern Yemen.

The Houthis have been advancing south from their strongholds in the mountains of northern Yemen. The move is probably related to the planned division of Yemen into a federation of states. The Houthis no doubt want as large an area as they can achieve and hope to have autonomy in areas they control.

One report claims that there have been at least 40 people killed in the last two days of fighting. The Houthi rebels have seized two villages Huth and Khamri, the latter being the seat of the rival Hashid tribe. According to reports the tribal chief Sheikh Hussein al-Ahmar ordered his fighters to retreat from the family farm after setting the buildings on fire. The battle lines have shifted back and forth but the latest advance by the Houthis is a severe blow to the Hashid tribe and the Ahmar clan that leads it.

The paramount chief of Abyei warned on Saturday that the incident, if not contained, could create more instability in the disputed oil region.

“There have been attempts by the Misseriya to go south of Abyei with their cattle for grazing and water. The people said, yes, there is no problem with their coming. Let them come but their coming should be preceded by some meetings and agreements before gaining access to the area. But the Misseriya do not want this,” Bulabek Deng Kuol told Sudan Tribune.

“They want to just come and move in the area with their weapons. Our people rejected this,” Kuol further said.