In other words, the gloves are coming off.

Youtube video clip of the Ansar Bait Al Maqdis shooting down an Egyptian Army helicopter in the Sinai. I suggest that you turn down the sound if you don’t want to listen to tardish jihadi jingles. 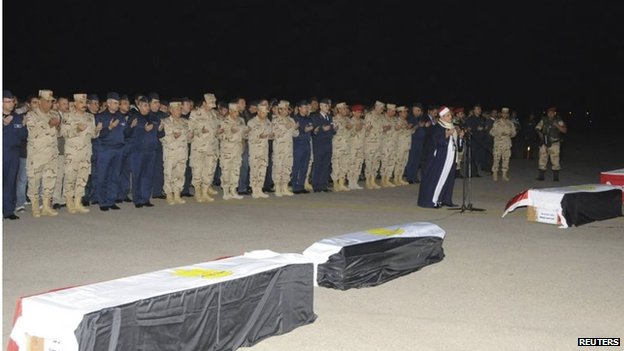 The reported shooting down of an Egyptian Air Force helicopter by Islamic militants with a portable surface-to-air missile marks a serious escalation in the challenge facing the Egyptian military.

It is fighting what amounts to an Islamist insurgency fused with wider lawlessness in the Sinai Peninsula.

Egyptian forces have relied heavily on US Apache gunships and various Russian helicopters in their battle with the militants.

But the apparent use of shoulder-fired surface-to-air missiles by insurgents dramatically raises the stakes in this increasingly bloody struggle.

Evidence for the use of a “manpad” – a “man-portable air defence system” – in shooting down the helicopter, which the army admits crashed, includes a video posted online by the militant group Ansar Beit al-Maqdis, apparently showing the incident.

The group claims to have downed the helicopter in northern Sinai, near the border with the Gaza Strip.

The military remains tight-lipped but well-placed sources in Cairo are quoted in the New York Times acknowledging that the helicopter was brought down by a Russian Strela-2 missile, also known as an SA-7 by Nato.