If your foot isn’t on their neck, their scimitar will be at your throat.

And none of it is Israel related, it’s all Islam, all of the time.

“I think we are witnessing a turning point, and it could be one of the worst in all our history,” said Elias Khoury, a Lebanese novelist and critic who lived through his own country’s 15-year civil war. “The West is not there, and we are in the hands of two regional powers, the Saudis and Iranians, each of which is fanatical in its own way. I don’t see how they can reach any entente, any rational solution.”

NOTE: The fanaticism in question is basic Islam 101. 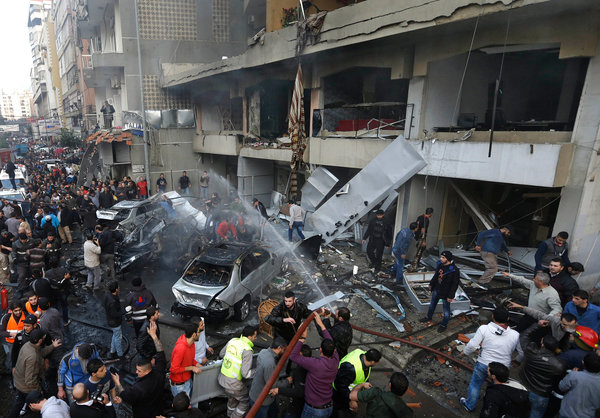 An explosion last Thursday rocked a Hezbollah stronghold in Beirut, one day after authorities announced the arrest of a senior Saudi-born Qaeda leader.

By BEN HUBBARD, ROBERT F. WORTH and MICHAEL R. GORDON

BEIRUT, Lebanon — The images of recent days have an eerie familiarity, as if the horrors of the past decade were being played back: masked gunmen recapturing the Iraqi cities of Falluja and Ramadi, where so many American soldiers died fighting them. Car bombs exploding amid the elegance of downtown Beirut. The charnel house of Syria’s worsening civil war.

But for all its echoes, the bloodshed that has engulfed Iraq, Lebanon and Syria in the past two weeks exposes something new and destabilizing: the emergence of a post-American Middle East in which no broker has the power, or the will, to contain the region’s sectarian hatreds.

Amid this vacuum, fanatical Islamists have flourished in both Iraq and Syria under the banner of Al Qaeda, as the two countries’ conflicts amplify each other and foster ever-deeper radicalism. Behind much of it is the bitter rivalry of two great oil powers, Iran and Saudi Arabia, whose rulers — claiming to represent Shiite and Sunni Islam, respectively — cynically deploy a sectarian agenda that makes almost any sort of accommodation a heresy.