The writer in the interview, Aymeric Chauprade, has a crippled understanding of the reasons for the crusades, as well as falling for the meme of justified Muslim anger concerning past ‘injustices’, but he does spot the danger Islam poses to the West, that Islam wants to exact a ‘revenge’. That’s something at least. Radicalism in this section is introduced as “the new interpretive model” which for Dr. Raddatz is most immediately linked to the 1974 event when Yasser Arafat was allowed to appear, armed, at the UN. From that point, the “… jihad culture of Islam” became the “new interpretive model” in the West. It is the appearance of this new radicalism, with its anti-Semitism, “coercion”, “threatening behaviour”, relativisation of the “good”, its moral confusion and its central control by the “profiteers” of the model which anticipates Dr. Raddatz’ treatment of the “metaphysics of radicalism” and “radical evil”.

Below is the first section of Part II of a four-section essay by Hans-Peter Raddatz about the EU, the Mediterranean Union, the Islamization of the West, and the deliberate engineering of the “Arab Spring” by the global elites to serve their own long-term goals. For the links to Part I, see the archive list at the bottom of this post.

This essay was originally published at Die Neue Ordnung in pdf form, and was kindly translated from the German by Rembrandt Clancy, who has also provided the reader with extensive notes. 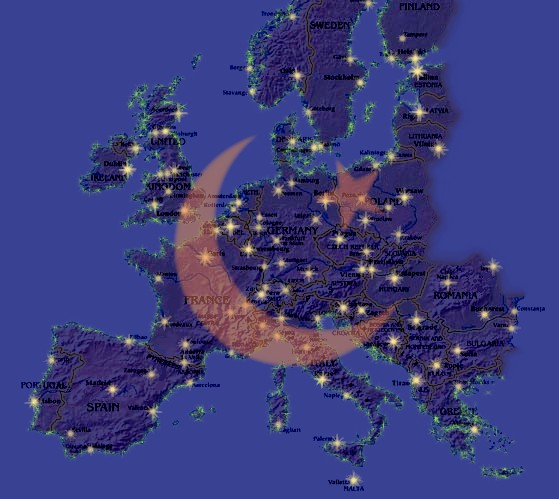 Dr. Raddatz uses references which may be unfamiliar to some. Therefore there are reference notes. These are of two types: translator’s notes and endnotes:

In Part I of this paper, translated by JLH, Dr. Raddatz introduced the “constellation of Islamic ‘movements’“, which have been among the crucial “contributors to the seasons of Spring and Summer”. His idea was to prepare the ground for Part II which examines which of the players, including the “Jewish-Christian resistance”,… will have to reckon with a Fall and Winter phase” (cf. Seasons, Part I, Section 2). After the “Arab Spring”, the so-called “path to democracy”, there follows the “Summer of the Islamic democracy” (Seasons, Part I, Section 5), a period of consolidation, an “Islamocentric” transition which ignores “the future for non-Muslims”, and instead of democracy actually introduces dictatorship and coercion (Seasons, Part I, Section 5). These events in the Middle East together with the concurrent trend toward “dhimmitude“ in Europe point to the “coming caliphate” adumbrated by the Union for the Mediterranean(2005), “encompassing all Euro and Islam residents” (cf. Part I, Section 1).

Part II introduces the prospect of “a new dominant culture”, which consists of Western “Left-Right extremes” fused with “Islamic law” (cf. Islamic Seasons, Part I, Section 5). Underlying the transition is deratiocination (Denkschwund): “In our estimation, the root cause of this trend, which can lead to a Western cultural autumn and winter, lies in the fundamental destruction of human reason” (Islamic Seasons, Part I, Section 5Trans. JLH). Based on the “constellation of Islamic movements”, Dr. Raddatz proceeds “in Part II to the Fall and Winter phases, to the metaphysics of radicalisation”, and “radical evil” (cf. Part I, Section 2). Even though the “seasons” have their origin in propaganda, they nevertheless have a certain correspondence to political changes in the Middle East. Dr. Raddatz, however, does not render the “seasons” as precisely delineated categories; for him, they also contain significance on the level of imagery, as a cycle depicting a cultural trajectory from false promise to decline and death.

More here at The Gates of Vienna.