The attack took place as the officers were driving to a security checkpoint near the Balhaf terminal, in the southern province of Shabwa, the official said.

“Armed men in two cars opened fire on the policemen, killing them on the spot,” he said. He was unable to identify the assailants or explain their motives.

Earlier Monday, a special forces officer was abducted by armed men northeast of Balhaf, and his body was later found to the west. He had been shot three times.

The corpse was found not far from where the eight policemen were killed, another security source said. 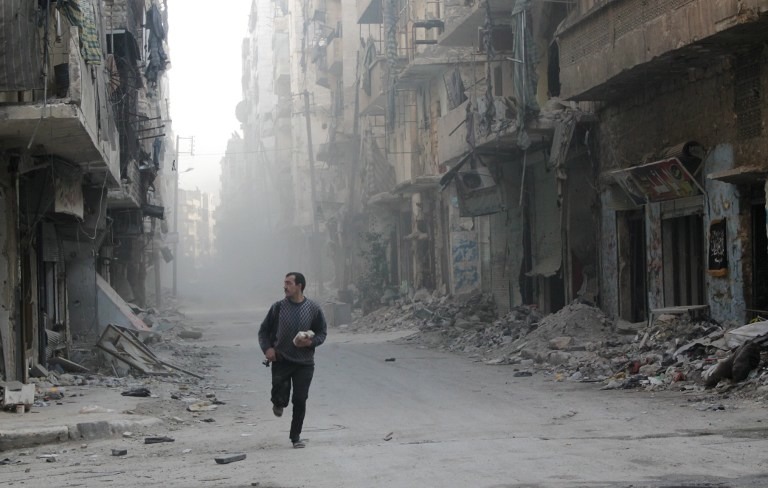 RUNNING FROM DANGER. A rebel fighter from the Free Syrian Army runs in a street of Aleppo’s Salah al-Din neighborhood during fighting against Syrian government forces on November 18, 2013. AFP / Karam al-Masri

DAMASCUS, Syria – A charismatic Islamist rebel leader from Syria has died of wounds suffered in a regime air strike as a government delegation held talks in Moscow on Monday, November 18, on elusive peace talks.

Syrian rebels and activists reported the death of Abdel Qader Saleh, chief of the rebel Liwa al-Tawhid Brigade, after an air raid in the Aleppo area last week.

His death is a blow to Islamist rebels, particularly in the Aleppo region, where Saleh came from and fought and where the regime has made a string of recent advances.

Liwa al-Tawhid announced the 33-year-old’s death on its official Facebook page in news confirmed by the Britain-based Syrian Observatory for Human Rights.

An Iraqi looks at a burnt vehicle after a car bomb attack in the northern city of Kirkuk on November 14, 2013.
Mon Nov 18, 2013 10:37PM GMT
At least eight people have been killed and several others wounded in a fresh wave of violence, including bombings and gun attacks, across Iraq.

On Monday, four people were killed in shooting incidents in and around the city of Baquba, situated some 60 kilometers north of the capital Baghdad.

On the same day, violence in the central city of Hilla, Baghdad, and the towns of Madain and Abu Ghraib located near the capital killed four people.

Reports also say that thirteen people were injured after a series of coordinated bombings hit the northern city of Mosul.

Moreover, a city council chief was wounded in a bombing in Tikrit.

No group has claimed responsibility for the attacks, but systematic bombings are a favorite tactic of al-Qaeda-linked groups, who seek to destabilize the country.

November 18, 2013 (KHARTOUM) – Two children were killed and another injured following a bomb attack by the Sudanese army (SAF) on South Kordofan’s Buram county in the Nuba Mountains on Sunday.

The attack comes as negotiations between Sudan’s ruling National Congress Party (NCP) and the rebel Sudan People’s Liberation Movement-North (SPLM-N) over the terms of a planned polio vaccination campaign for children in rebel-held areas remains deadlocked.

The SPLM-N, which is leading an insurgency against the Khartoum regime, said the latest attack showed children were at more immediate risk of bomb attacks than the threat of polio.

The attack was captured on video and shows a Mig-24 aircraft approaching the village prior to the attack. In disturbing footage of the aftermath villagers are shown weeping inconsolably on the ground, while their homes burn around them.

At one point villagers lift a pink cloth from a stretcher to reveal the bloodied bodies of the children lying side by side.

The video also includes footage of a huge crater where the bomb landed. At least gunmen riding motorcycles fired at the two trucks, killing a driver. They then set a truck carrying a heavy NATO vehicle on fire.

The trucks, coming from Afghanistan, were headed for Karachi.