I can’t think of anything more ridiculous than a Jewish university maintaining ties to an Islamonazi supporting university, in spite of the good intentions. There has to be a line drawn that one cannot cross if you want to be taken seriously as an institution that values all the basic core values of Western civilization. Good grief.

It wasn’t the Nazi-like demonstration at Al-Quds, it was Sari Nusseibeh’s blaming “extremist Jews” for starting a “vilification campaign” against the Arab university that severed the bond. 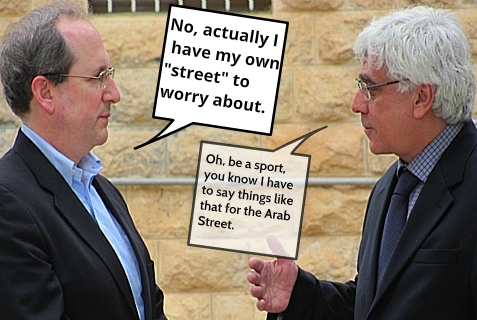 Al-Quds students or supporters had paraded in the Al-Quds courtyard in paramilitary gear, raising the Nazi salute and trampling on drawings of Israeli flags.

It must have been particularly painful for an academic like Lawrence to find himself forced to stand on the precipice straddling “two of our most cherished values – values that appear to be in conflict: a robust respect for free expression and a culture that values civility, decency, and dignity.”

Most Brandeis students with whom The Jewish Press spoke, were glad that President Lawrence suspended the relationship.  In fact, most were not even aware that there was any relationship between the two institutions.  It was the media firestorm about the Nazi-like parade that ignited the concern.

HAD AL-QUDS PREVIOUSLY BEEN A PEACE-LOVING SISTER UNIVERSITY?

But there have been not just red flags, but flashing lights and sonic booms that should have alerted the willfully  blind administration of Brandeis University from the get-go that Al-Quds was not brimming over with desire to be besties with an American university with vaguely Jewish ties.

For example, in April of 2006, a huge poster was hung in one of the al Quds buildings to honor Sami Salim Hammad, a former Al-Quds student, who blew himself up in Tel Aviv, killing 11 people – including an American teenager – and ending his own life.

And Al-Quds is home to the Abu Jihad Museum. The museum is named for Khalil Al-Wazir, whose “nom de guerre,” abu Jihad, means “father of the holy war.”