Attacks Against Shiites in Iraq Kill at Least 41

The ritual, known as Ashoura, is observed every year over a 10-day period and has been marred previously by massive attacks by al-Qaida and other Sunni extremists who see Shiites as heretics. This year, the attacks come amid an escalating campaign of violence by insurgents seeking to thwart the Shiite-led government’s efforts to maintain security.

The deadliest of Thursday’s attacks was in the town of al-Saadiyah, 140 kilometers (90 miles) northeast of Baghdad, where a suicide bomber struck a group of Shiites gathered for an Ashoura event. The explosion killed at least 32 people and wounded 75, two police officers said.

The Shiites at the Saadiyah gathering were recreating the 7th century battle of Karbala, a city in present-day Iraq. Ashoura commemorates the death of Prophet Muhammad’s grandson, Imam Hussein, in that battle.

Five were killed in Egypt’s Sinai Thursday, including three militants, as an armed insurgency continues to plague the restive region A helicopter flies overhead as soldiers in military vehicles proceed towards al-Jura district in El-Arish city from Sheikh Zuwaid, around 350 km (217 miles) northeast of Cairo 21 May, 2013 (Photo: Reuters)

Security forces have siezed arms from the assailnts’ vehicle, including rocket-propelled grenades (RPGs) and machineguns. TRIPOLI, Libya — A security official in Libya says separate attacks have killed a Muslim cleric and a former police officer in the eastern city of Benghazi.

The official offered no motive for the attacks. He spoke on condition of anonymity because he was not authorized to speak to journalists. 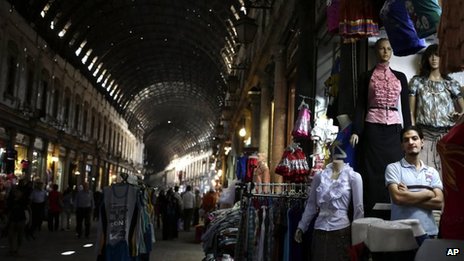 Three people have been killed by bombs and mortar fire near the historic Old City of the Syrian capital Damascus, according to state-run media.

Two bombs exploded near the capital’s famous Hamidiyeh market, according to the state-run al-Ikhbariya TV station.

The Syrian Observatory for Human Rights, a UK-based activist group, said it had also seen “initial reports” of Thursday’s deaths in Damascus.

Central Damascus has experienced increasing violence recently as clashes between government forces and rebels in its suburbs continue.

The men who police said were members of Lashkar-e-Jhangvi (LeJ), a banned Sunni Muslim extremist group, were allegedly planning to attack a Shiite gathering on Friday.

Pakistan’s minority Shiite community will mark Ashura, the holiest day in their calendar, on Friday with processions to mourn the seventh-century killing of the Prophet Mohammed’s grandson Imam Hussein.

Ashura processions have been targeted in the past and security has been beefed up across the country in preparation.

“We carried out an operation against the terrorists on an intelligence tip-off,” Chaudhry Mohammad Aslam, who led the raiding team, told AFP.

A fierce gun battle broke out during the raid in in Maripur town in western Karachi, in which three officers were wounded and six suspected militants were killed, he said.

US soldiers carry a wounded comrade during a patrol in Logar Province, Afghanistan. (File photo)
Thu Nov 14, 2013 7:36AM GMT

A foreign soldier serving with the US-led International Security Assistance Force (ISAF) has been killed in a bomb explosion in southern Afghanistan.

ISAF confirmed in a Thursday statement that the “service member died following an improvised explosive device (IED) attack in southern Afghanistan yesterday.” However, it did not reveal the nationality of the victim or the exact location of the attack.

The latest death brings to 147 the number of foreign soldiers killed in Afghanistan so far this year.

The increasing number of military casualties in Afghanistan has caused widespread anger in the United States and other NATO member states, undermining public support for the Afghan war. (Reuters) – A Sudanese man was killed in a second flare of clashes since Saturday between Saudi riot police, citizens and foreign workers in Riyadh amid a clampdown on visas, state media said late on Wednesday.

The report on the official Saudi Press Agency, which cited a Riyadh police spokesman, gave no further details about the dead man, but said the clashes had started as a dispute between Saudis and foreigners earlier in the day.

“A dispute between a group of citizens and violators of the residence and work permits happened, resulting in fights between the two groups with knives,” the police spokesman was quoted as saying.

The spokesman also said 17 other people of different nationalities were injured and taken to hospital after the clashes in the Manfouha district of southern Riyadh, a low-income area that is home to many poorer expatriates.

Gunshots could be heard occasionally from inside Manfouha’s narrow streets.