A fuel tanker burns in the southern city of Basra on May 21, 2007 (AFP Photo/Essam al-Sudani)

Iraq is mired in its worst violence since 2008, with more than 5,500 people killed this year despite major military operations targeting insurgents and tightened security measures.

In Wednesday’s deadliest attack, a suicide bomber drove an explosives-rigged tanker in front of police station in Muqdadiyah, in restive Diyala province, and detonated it at the entrance, police and a doctor said.

The attack killed seven people and wounded 11 others, all police, and caused massive damage to the station.

The bombing is the latest in a string of attacks targeting police in the past week in Kirkuk, Salaheddin and Diyala provinces.

By DIAA HADID17 hours ago 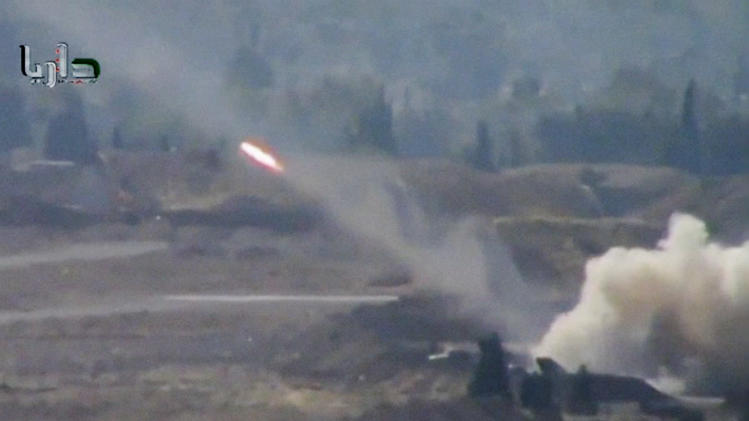 BEIRUT (AP) — Bombs targeting the entrance of a landmark Ottoman railway building in Damascus and a feared security agency in Syria’s southeast killed at least 16 people on Wednesday, activists reported.

There was no immediate claim of responsibility for the attacks, but rebels tied to al-Qaida have previously claimed bombings of security institutions and have also targeted the center of the capital, trying to take the war to the heart of President Bashar Assad’s power.

Eight died and at least 50 more people were wounded in the blast at the country’s railways authority, housed in a century-old structure that was once the main Damascus train station, reported state news agency SANA and activists.

State TV broadcast images showing several wounded people walking away from the site of the blast, passing apartment buildings and shops with their windows blown out. Part of the railway building’s wooden roof was shattered.

Also Wednesday, a suicide car bomb smashed into the entrance of the air force intelligence agency in the southeast city of Sweida, killing eight people, said activists. State media reported a blast but did not say it hit the security compound. A military spokesman stated that it had also seized a number of weapons, including machine guns, RPGs and homemade grenades.

The armed forces, supported by police personnel, also torched four cars that did not have licence plates or registration papers, army spokesman Ahmed Ali stated on Thursday via his official Facebook page.

Sixty-one houses have also been destroyed that, according to Ali, belonged to militants.

Wed Nov 6, 2013 9:8AM
At least seven Taliban militants have been killed and 21 others arrested during the latest mop-up operations across Afghanistan, the country’s Interior Ministry says.

According to the Interior Ministry, the joint cleanup operations were conducted in different areas of the war-wracked country, including Kandahar, Maidan Wardak and Paktika provinces on Tuesday.

“In past 24 hours, Afghan National Police conducted several joint clearance operations with the cooperation of Afghan National Army, National Directorate for Security (NDS) and Coalition Forces to clean some of the areas from terrorists and enemies of peace and stability of Afghanistan,” the ministry said in a statement on Wednesday.

“As a result, seven armed Taliban were killed and 21 others were arrested,” the statement further read.

The Afghan National Police also seized certain amounts of weapons and ammunition used by the militants. TEHRAN, Iran — Gunman ambushed and killed an Iranian state prosecutor Wednesday in a restive southeastern region near the Pakistani border, reports said, less than two weeks ago after militants killed 14 border guards and prisoners described as “rebels” were later hanged in apparent reprisal.

It was not immediately clear whether the latest killing was linked to the unrest in Sistan-Baluchistan province, which includes clashes with drug smugglers and sporadic battles with an armed faction that claims to fight on behalf of Iran’s Sunni minority. But state radio said the slain prosecutor, Mousa Nouri, has been considered one of the toughest against suspected opium and other drug networks that use routes leading from Pakistan and Afghanistan over the rugged hills and deserts.