Monday. The police gave chase and eventually caught up with the bus. The attacker was arrested after he tried to escape. The hijacker (illegal?) who lived in Porsgrunn did not have a Norwegian passport.

Telegraph Two men and a woman have been killed in Western Norway after a man wielding a knife hijacked the express bus they were travelling on. The man in his 30s, from South Sudan, was arrested at just before 7pm Norwegian time. He was flown to hospital in Bergen where he was being treated for injuries sustained during the hijack.

No idea if this is Islam/Muslim related, the media is keeping it mum.

Police said the hijacking happened Monday night that the perpetrator is not ethnically Norwegian. 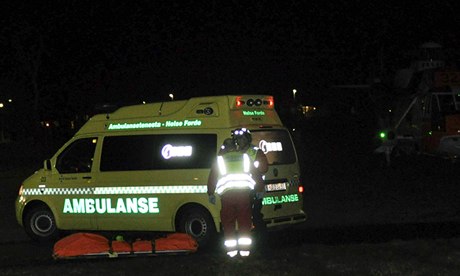 Emergency service personnel stand next to an ambulance near the scene of a bus hijacking in Aardal, Norway. Photograph: NTB Scanpix/Reuters
A knife-wielding man hijacked a bus on Monday in rural Norway and killed

the driver and two passengers before he was detained by authorities, officials said.

Police in Sogn and Fjordane county in western Norway gave few details about the suspect, but described him as a local resident originally from South Sudan. Police attorney Trine Erdal said the suspect was in his early 30s, not in his 50s as police had earlier reported.

The motive for the killings was not immediately clear.

The victims were two men in their 50s – the Norwegian bus driver and a Swedish passenger – and a 19-year-old Norwegian woman, Erdal said. All had been stabbed. There were no other passengers on the bus, she added.

The suspect was initially apprehended by rescuers from the fire department who were the first to arrive on what they thought was an accident scene, police said. The suspect was later arrested by police and taken to a hospital for treatment of cuts but was not seriously injured, Norwegian news agency NTB reported.