ADEN (AFP) — Suspected al-Qaida gunmen shot dead on Thursday two soldiers and a civilian in an attack on an army checkpoint in the southern province of Abyan, a local official said.

The assailants opened fire at a checkpoint in the Ahwar area, and sped away in their car,” said the official, adding that the attack left also three people wounded.

“The attackers who are suspected of belonging to al-Qaida, managed to escape,” the official said.

The soldiers belonged to the 111th Brigade, whose command in Ahwar came under attack earlier this month with a car bomb that killed six soldiers and wounded 17 others.

In other unrest, armed men attacked an office for intelligence services in Khor Maksar, in the port city of Aden, wounding a policeman and a passerby, a security source said. 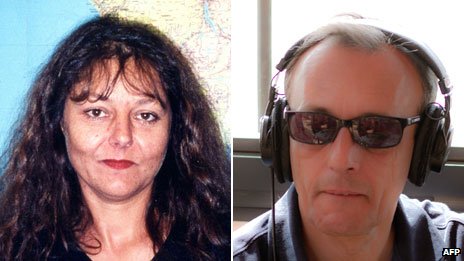 RFI said the two journalists were passionate about Africa

Two journalists for French radio station RFI have been killed after they were kidnapped in the northern town of Kidal in Mali.

Claude Verlon and Ghislaine Dupont were abducted after interviewing a local political leader. Their bodies were found outside the town soon after.

The killings come days after France was celebrating the release of four hostages from neighbouring Niger.

Radio France Internationale said Claude Verlon and Ghislaine Dupont were on their second assignment in Kidal, having travelled to the town in July to cover the first round of the presidential election.

Pakistani Taliban gather for funeral of leader killed by drone

PESHAWAR, Pakistan (Reuters) – Pakistani Taliban fighters gathered on Saturday for the funeral of their leader who was killed by a U.S. drone aircraft while some Pakistani politicians denounced the attack and called for the cutting of U.S. supply lines into Afghanistan.

Pakistani security officials said Hakimullah Mehsud, who had a $5 million bounty on his head, and three others were killed on Friday in the militant stronghold of Miranshah in northwest Pakistan.

Mehsud was killed when his vehicle was hit after he attended a meeting of Taliban leaders, a Pakistani Taliban fighter said. His bodyguard and driver were also killed.

Mehsud took over as leader of the Pakistani Taliban in 2009. The group’s two previous leaders were killed in attacks by U.S. missile-firing drone aircraft.

According to a report released by SNHR, 21 of those slain were killed by Assad regime forces and one by organization of Islamic State in Iraq and Damascus (ISID).

The report documented the crimes committed against the photo-journalists, cameramen and reporters who had been working in Syria, also stating two press members died of torture by security forces in Syria.

Four security personnel, including two anti-al-Qaida militiamen, have been killed in shootings in north-central Iraq.

Police officials said the first attack took place early today when gunmen in a speeding car killed two fighters and wounded four others at a security checkpoint manned by Sunni Sahwa militiamen in the city of Samarra.

The Somali National Army (SNA) has killed more than 30 Shabaab militants in Kolbio, close to the Kenyan border, the Kenya Defence Forces has said.

Military spokesman Major Emmanuel Chirchir said SNA are believed to have attacked a base belonging to the militants.

On Tuesday, a senior US military official told the media that a drone strike in southern Somalia had killed two Al-Shabaab militants including the group’s top explosives expert.

Armed clashes between Taliban fighters and Afghan security forces killed 13 people and wounded 15 others in the northern province of Faryab on Friday.

The violence ensued after security forces staged an attack on the Taliban fighters as they were organizing an attack, according to a security command center spokesman Muhammed Reza.

Noting that four important Taliban commanders were among the dead, Reza said seven Taliban, three soldiers and three civilians had been killed. 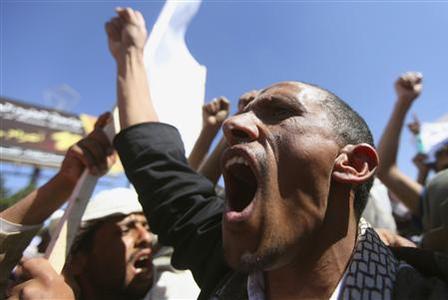 (Reuters) – The death toll in four days of clashes between rival Muslim clans in north Yemen rose to 55 on Saturday, one of the clans said, as the Yemeni government tried to broker a ceasefire in a region that lies largely outside its control.

Shi’ite Houthi rebels launched an attack on the town of Damaj, held by their Sunni Salafi rivals, on Wednesday.

The army said earlier a ceasefire had come into effect on Friday afternoon, but a Salafi spokesman then said clashes had continued on Saturday, and that in all 55 Salafis had been killed by rockets and tank fire.