An excerpt from the last installment on Elisabth Sabaditsch-Wolff’s report from the Alliance of Civilizations conference in Vienna, originally published at GOV.

The report below is the final part of a three-part series. Previously: Part 1, Part 2. 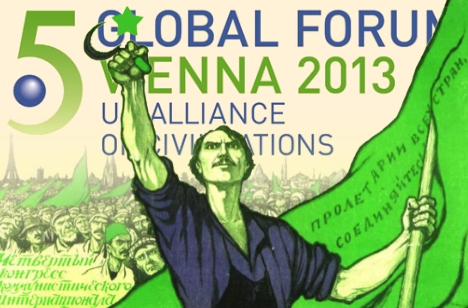 Reflections on a World Gone Mad
Part 3: Implementing the results

How does the Alliance of Civilizations propose to implement its strategies of re-education? In order to achieve alignment with demands voiced by the OIC, the Alliance aims to address youth, education, media, and migration, picking up initiatives proposed by the OIC:

And what better way to accomplish this evil than to re-educate youth? This constitutes Goebbels-like indoctrination at the lowest and weakest level of society, our children, who are to be conditioned to tolerate even the intolerable.

Would that include tolerance of religiously sanctioned domestic violence? Just a cultural matter which must be respected. Acceptance of the death penalty for apostasy? A minor matter which inter-religious dialogue can talk away. A woman receiving only half of what her brother inherits, as sanctioned by religious law?

So this is suddenly no longer a matter of fundamental rights after all, and must be unquestionably respected in the name of diversity? And why is there nothing said about religious and cultural norms and practices which promote hatred of Jews, Christians and apostates, those institutions which oppose freedom of expression and which see blasphemy as a serious moral vice, or even a capital crime to be punished according to sharia law?