Thank Lori for fleshing out the details.

First of all, all Israeli citizens are permitted to ride all Israeli transportation vehicles, whether they are Arab, Finnish or Lithuanian, Jewish, Muslim, Christian or Buddhist.

‘Palestinian Only’ Buses in Israel: Goebbels’ Big Lies are Back

Of course there are no “Jews only” roads in Israel, just as there are no Jews only buses or even ‘Palestinian only’ buses in Israel. But if you tell a big lie often enough, well, Goebbels was the master and look where that took us. 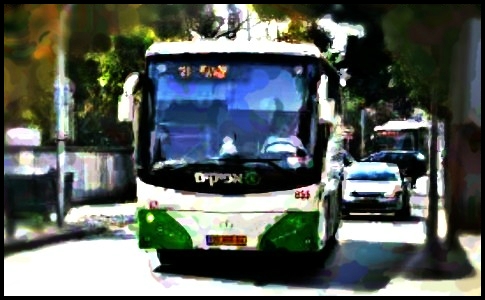 The headlines roll out, the journalistic warfare continues, and the Jewish State once more is cast in the starring role of “evil, Apartheid empire.”  This time the story is that Israel is forcing the Arab Palestinians to ride separate buses from the ones Jewish Israelis ride.

The reality is exactly the opposite – there are no “Palestinian only” buses. Instead, with its new bus routes, Israel is reducing crowded buses, attempting to relieve ethnic tensions and security concerns, and is assisting Arab Palestinians enter Green Line Israel to work. But we’ll get to the facts – which exonerate Israel from “Apartheid” charges – in a minute. For right now you can rest assured that despite efforts to cast the Arab Palestinians in the role of Rosa Parks, a closer fit would be to cast the purveyors of this latest attack as peddlers of the Big Lie.

One headline, from the magazine formerly known as Newsweek, and now known as – more accurately – the Daily Beast, “West Bank Buses Only the Latest in Israel’s Segregated Public Transport,” and one from the uber-leftist+972, “Israel’ new ‘Palestinian only’ segregated bus line,” and even the Israeli news media outlet YNet fans the flames: “Ministry launches ‘Palestinians only’ buses.”

The claims are exactly as you would expect them, and made by those whom you would suspect.  For example, Jessica Montell is the director of the anti-Israel, pro-Arab B’tselem Rights group. “Creating separate bus lines for Israeli Jews and Palestinians is a revolting plan,” Montell told Army Radio. “This is simply racism.”

What are the facts?