If it were private ownership doing it, then it’s another matter completely, but this is the taxpayer subsidizing sharia law ”home (not so) improvements, and so hence the reason why I’m against it for philosophical reasons.

By Anna HolliganBBC News, The Netherlands 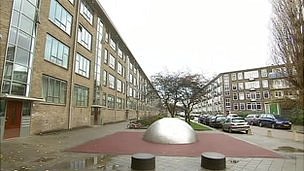 The renovated apartments look quite typical from the outside

Renovations in Amsterdam apartments – nicknamed “halal homes” in the press – have sparked a political row in the Netherlands.

About 180 apartments in Amsterdam have been given special makeovers which suit the wishes of Muslim residents. Features include individual taps that can be used for ritual cleansing before prayers and sliding doors to keep men and women apart.

Some right-wing politicians have been stirring up public opposition, warning that anyone asking for such modifications should “leave for Mecca”.

From the outside, the apartments look no different from other social housing blocks in the residential area of Bos and Lommer, in the less opulent western reaches of the capital.

Aynur Yildrim gives a tour of her home with the enthusiasm of an inspired estate agent. In the bathroom she bends to reveal the lowered water point – a modification that, in some variation, might equally exist in non-religious homes. But it is the perceived religious aspect of these changes that has made them so controversial.

And it is in the tidy kitchen that the distinction is most striking, as Ms Yildrim shows off the sliding doors.

“I wanted a closed kitchen, in order to be able to close the kitchen off now and then for a bit more privacy. Sometimes we like to be separated, the women on one side and the men on the other.”

Wim de Waard of the housing association Eigen Haard insisted that the changes were “absolutely not religiously inspired – they are just practical adaptations”. The adaptations followed consultations with local residents, including Muslim groups.

Mr de Waard stressed that apartments were not reserved for Muslims – homes were assigned on the basis of rank on the waiting list, size of household and income.

For many Dutch people, living in a historically tolerant and liberal country, the idea of separating men and women has led to some criticism that these buildings are effectively condoning some kind of gender inequality.