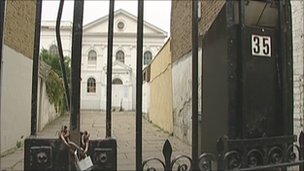 A south London mosque is at the centre of allegations it helped promote of acts of terror and hate in Pakistan.

Leaflets circulating in Pakistan calling for the murder of members of the Ahmadi Muslim sect directed readers to a website naming Stockwell Mosque.

The website mentioned on the leaflets in turn advised people with queries to contact the mosque in Stockwell.

Angry trustees at the mosque said its name had been misused and it had no links to the Pakistani organisation.

Trustee Toaha Qureshi said: “We don’t have any linkage with this organisation which is promoting hate.”

Minority communities in Pakistan have become targets of intense discrimination and even assassination.

A full scale assault by Jihadi gunmen on an Ahmadi mosque in Lahore in May 2010 left 93 people dead and a whole community terrorised.

The Ahmadis’ beliefs are at theological odds with Islam and it has been a source of conflict for decades.

The Ahmadis have a display to “martyrs” at their international headquarters in Merton, south London.

Leaders of that community claim support from British Muslims is fostering a campaign of hate in Pakistan. They say as a result more people are arriving in London seeking asylum.

Dr Hamidullah Rehmatullah Mughal was a prominent dentist and elder in the Ahmadi community of Faisalabad. His family believe he was targeted by militants trying to cleanse Pakistan of religious opponents. 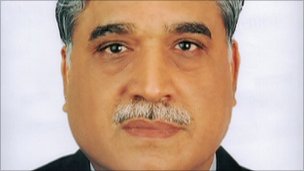 Dr Hamidullah Rehmatullah Mughal was murdered in a sectarian killing

He was murdered in a sectarian killing shortly after the Lahore bombings.

His family say it was his desire to build a mosque for the Ahmadi community that brought him into conflict with Mullahs who are supported by the Pakistani Taliban.

His daughters Asifa and Zahida, along with their mother, have claimed they needed to go into hiding for several months and they have now sought asylum in the UK.

It is not only Ahmadis who are targeted by Jihadis in Pakistan but since the armed attack on the Lahore mosque, threats are said to have intensified against this community.

In London, too, hostilities have burst into the open. In Tooting last year a public campaign to boycott Ahmadi businesses was only halted after the intervention of local MPs and community leaders.

In the latest escalation in July leaflets were circulated in Faisalabad calling on ordinary Muslims to murder Ahmadis and attack their businesses.

The leaflet was handed out in several markets in the city and, according to local lawyer Muzaffar Ahmad Zafar, it spread panic.

It was this leaflet that directed readers to the Khatme Nubuwwat (KN) organisation’s website.

KN is a perfectly legitimate group which defends the traditional interpretation of Islam. In this case the website advised that all overseas queries should be directed to the Stockwell mosque. 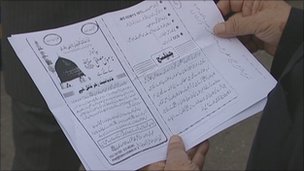 Hate leaflets circulating in Pakistan have been linked to Stockwell Mosque

It is the fear among Ahmadis that support from London Muslims is making matters worse in Pakistan.

Prominent Ahmadi Pakistani and Supreme Court Lawyer Muji ur Rehman suggests many British Muslims are “carrying fundamentalist ideology from here (London) back to Pakistan, when instead we would expect them to come with their liberalism instead”.

BBC London approached the trustees of the Stockwell mosque to ask if they supported the call for murder in the leaflets and why they appeared to be associated with this type of hate literature.

Mr Qureshi, a senior trustee brought in to rehabilitate the mosque after it was taken over by radicals at the time of 9/11, has expressed his anger that they have been associated in any way with the leaflet.

He said: “We are very angry, this is why we have contacted the authorities in Pakistan that our name is falsely being used.”

Although neither Mr Qureshi nor BBC London could verify who had produced the leaflet in Pakistan, Mr Qureshi promised to make strenuous efforts to have Stockwell Mosque’s name removed from the KN website.

Within three days of speaking to BBC London that happened.

Mr Qureshi said that when he had contacted the people responsible for the website they insisted the mosque’s name would not reappear.

Evidence in Pakistan points to increasing violence against various minority groups. The Ahmadis are clearly not alone in that regard.

Making sure that intolerance does not spread to the capital remains a priority for London’s Ahmadi community.