There certainly has to be some serious push back against the Leftist camp within the Evangelical movement, which is demonstrably pro-Palestinian and by default, anti-Jew. Glenn Beck’s trip to Israel in which numerous events have been arranged showing Christian support for the Jewish state, promises to be something that does indeed help to push back the Leftists’ agenda. This is an excellent development. KGS

The first event in Glenn Beck’s series of events in support of Israel was an outstanding success, though walking through a minefield of sensitivities. Held in the historic Roman-build coliseum in Caesarea, the program mixed Christian and Jewish themes—stressing the commonality of world views and spiritual values.

Beck estimated that 60 percent of the audience was Israeli and Jewish, and many of them were Orthodox, a sign that this community, at least in Israel, isn’t afraid of allying with Evangelical Christians In addition, Beck organized viewing parties around the world, including in some Muslim-majority countries where even watching a pro-Israel event over computers would have to be done in secret.

Here’s my serious analysis of Beck’s views on the Middle East and why they are largely accurate.

And here’s a great first-hand report of the event by Yisrael Medad.

What’s really impressive is that even left-wing Haaretz was impressed, and that’s about as close to a miracle as you’re going to get this week.

Yisrael Medad has an excellent accounting of last night’s event in Caesarea:

With Glenn Beck in Caesarea

I was at Glenn Beck’s first part event of his Restoring Courage campaign during his current visit here in Israel at Caesarea. 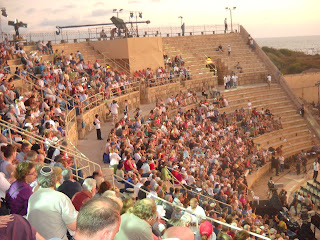 Fears of sneak proselyzting or missionary work were not only unfounded but dashed. I think the Christian speakers were more pro-Jewish than the Rabbi Shlomo Riskin, in a sense.Even Haaretz was wowed:
More here.