As a Jew and descendent of victims of villainous blood libels, Barry Rubin, gives us his personal thoughts on the issue raging around the internet and news media, concerning the mendacious, slanderous, mean spirited blood libels thrown at the feet of many in Right wing, talk radio, and at Sarah Palin in particular. KGS

The Tucson Shootings, Blood Libels, and Those Who Perpetrate Them 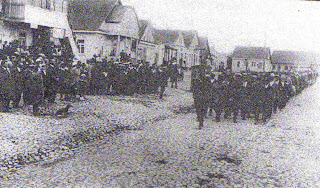 [Pictured left: The main street of Dolhinov, then in Poland, in 1931 on Polish national day. The 1886 pogrom took place in the area pictured and against Jewish shops on the left behind the onlookers.]

Without taking any partisan position, but purely on the issue’s historical merits, nothing could have been more appropriate than Sarah Palin’s use of the term “blood libel” to describe what happened to her after the Tucson killings. I know because my direct ancestors were the target of a blood libel.

A blood libel is a false accusation that someone else has shed blood in order to harm that person or people, advance one’s own political agenda, and stir hatred for them in a manner that might lead to the shedding of their blood in revenge.

I’ll tell the story of an actual blood libel first–recounted by newspapers at the time and interviews with the peasants done later by Russian anthropologists–and then explain the current post-Tucson story.

It’s a beautiful spring day for a fair, May 8, 1886, the festival of Saint Stanislav Dolhinov’s Russian Orthodox patron saint and the local church’s namesake in the town of Dolhinov, half-way between Vilna and Minsk. Among those walking around in the crowd and enjoying the food and festivities is the Krasovsky family of Gabytatsya village. Somehow, their 12-year-old son, Stanislav, whose holy name day it is, wanders off or perhaps his parents—dazzled by the splendors around them, relaxed by drink or tending their other children—lose track of him.

He’s never seen alive again. Naturally, the parents launch a frantic search but he’s nowhere to be found in Dolhinov’s streets. Five days later, his body is discovered deep in the forest and many miles away, covered with tree branches. It is rumored that he had been stabbed in a dozen places. His funeral is held in Budslav, with lots of police to ensure no disturbances break out. You can still see his grave there, marked with a large pine cross.

Ritual murder is an old antisemitic accusation. It is one of the Canterbury Tales, that fourteenth-century classic of early English literature. In the Dolhinov area there is an account of such a story from 1603. The slander popped up as far away as Damascus, Syria, in 1840, and the long-time, Syrian defense minister Mustafa Tlass published a book in 1983 claiming Jews really do murder little children to turn their blood into matzoh. In Saudi Arabia it’s still claimed as true in newspapers, and the slander appears transmuted into modern political form through propaganda stories claiming deliberate Israeli murders of Palestinian children.