This is one of the more comprehensive reports that also includes links to videos of the aftermath of the attack that the TT places to this post. Absolutely stunning display of barbarity. KGS (AINA) — The car explosion that went off in front of Saints Coptic Orthodox Church in Alexandria killed 21 and injured 96 parishioners who were attending a New Year’s Eve Mass. According to church officials and eyewitnesses, there are many more victims that are still unidentified and whose body parts were strewn all over the street outside the church. The body parts were covered with newspapers until they were brought inside the church after some Muslims started stepping on them and chanting Jihadi chants (video showing dead bodies and limbs covered with newspapers in the street).

According to eyewitnesses, a green Skoda car pull up outside the church shortly after midnight. Two men got out , one of them talked shortly on his mobile phone, and the explosion occurred almost immediately after they left the scene. On the back of the Skoda was a sticker with the words “the rest is coming” (video of car explosion and Muslims shouting “Allah Akbar”).

It was reported that the bomb, locally made, had 100KG of explosives in addition to having nails, glass and iron balls inside. The strength of it not only caused glass panes to be shattered in all the neighborhood, but also made body parts fly into the building’s fourth floor, and to the mosque facing the church.

There was no immediate claim of responsibility but officials hastily blamed either Al-Qaida or the Israeli Mousad of being behind the blast, but none of them mentioned the Egyptian state security which is viewed by Copts as the real culprit. 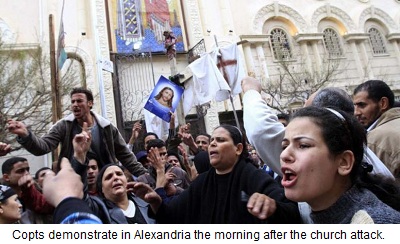 To clear his security forces of negligence, the Minister of Interior said that the blast was an “individual” case, caused by a single suicide terrorist detonating his vest, and has nothing to do with an exploding car. The governor of Alexandria claimed the attack as being aimed at Muslims and Christians alike.

After the blast, traumatized Copts were angered by chants of “Allah Akbar” from Muslims and began hurling stones at the mosque. Immediately security forces which were absent during the car blast and the ensuing events, appeared and starting shooting tear gas at the Copts, and they in turn hurled stones at them, said an eyewitness. Fifteen Copts were rounded up from their homes by the authorities.

After Friday prayers On December 31 and in front of Al Kayed Gohar Mosque in Alexandria, Salafi Muslims held the 17th in the series of demonstrations against the Coptic Church and its Pope Shenouda, repeating the Iraqi Al-Qaeda threats against Egypt’s Coptic Church, demanding the release of the two priests’ wives, Wafaa Constatine and Camilia Shehata, whom they claim had converted to Islam but were being held against their will by the church in monasteries (AINA 11-12-2010).

Following the massacre of the congregation at Our Lady of Deliverance Church in Baghdad on October 31 2010, Al-Qaida threatened the Coptic Church and demanded the release of Muslim women held by the church, else Christians everywhere would be their target. As a result Egyptian authorities supposedly stepped up protection around Copt places of worship after President Mubarak said he was committed to protecting the Christians “faced with the forces of terrorism and extremism”.

“Security should know that those who demonstrated are the hand of Al-Qaida in Egypt,” said Hany el-Gezeiry, head of Copts4Egypt. “They should have arrested them to investigate who was behind them. They want to destroy Egypt from inside and the government kept quiet, giving them a free hand to do what they wanted. I believe Al-Qaida achieved what it wanted.”

El-Gezeiry asks why this Skoda vehicle was allowed to park in front of the church in an area cordoned off by security, when it was known that Al-Qaeda had already announced its intention of carrying out criminal acts against churches.

Eyewitnesses confirmed that security forces guarding the church withdrew nearly one hour before the blast, leaving only four policemen and an officer to guard such a big church and nearly 2000 people attending the midnight mass. “Normally they would have waited until the mass was over,” said el-Gezeiry. He also commented on the Muslim’s schadenfreude at the massacre at the church, who were heard chanting “Allah Akbar.”

“Is this a victory?” He asks. “Whoever saw this fire and people dying and body parts all over the place and could still chant ‘Allah Akbar’ is a terrorist.”