I met David and his lovely wife Giselé for the very first time in Brussels, during the first ever Counterjihad conference, and have kept in contact with them  ever since. The TT has known for some time that Mr.Littman is facing some serious health issues, now it seems that he has broken his silence about it, so the Tundra Tabloids gladly republishes his letter -sent to the UN High Commissioner of Human Rights about the plight of Christians in Iraq on New Years Eve- first published at the Gates of Vienna.

I’ll leave the Baron to fill in the rest. KGS

NOTE: Folks, yes, Mr.Littman is as spirited in person as he is on the floor of the Palais des Nations, as many have seen in numerous videos circulating on the internet, pronouncing his unwavering commitment to true human rights, opposing oppressive anti-free speech legislation and arguing against sharia law.

The Writing on the Wall

For many years David Littman has been a tireless fighter for human rights at the United Nations. He consistently demands that the UN live up to what it claims to stand for, and insists that human rights organs apply the same standards to Muslim countries and the Third World as they do to the Western democracies.

I first met Mr. Littman in October 2007, at the Counterjihad Brussels conference. During his presentations at the sessions, the amount of material he had at is fingertips was astonishing. There was never enough time for him to cover all the relevant information — we had to be content with a general overview of the human rights farce at the UN. His talks revealed the extent to which the United Nations has been Islamized through the overwhelming influence of the OIC. 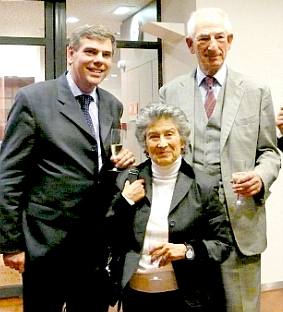 The hard work and long hours have taken their toll on David Littman. He suffered a brain hemorrhage this past fall, and his recovery has been slow and difficult. Now he has been diagnosed with leukemia, and is confined to his home in Switzerland. He is no longer able to attend meetings of the Human Rights Commission in Geneva, but is continuing the fight from home: on the last day of 2010, Mr. Littman wrote a letter to the UN High Commissioner of Human Rights about the plight of Christians in Iraq.

Many thanks to Big Peace for publishing the letter, which is reproduced below:

To the High Commissioner for Human Rights, Navi Pillay

Having suffered a serious brain haemorrhage on 27 November — and now being treated for acute leukaemia — it seems highly unlikely that I shall be allowed by my doctors to return to the Palais des Nations — without a mask, if at all — to defend universal human rights as I have endeavoured to do for the past 25 years. Hopefully, I shall remain in shape to prepare an ‘Appeal’ now and again — and perhaps more, if providence should allow.

Our 1st intervention on 3 February 1986 was a written Appeal — on behalf of the WUPJ — to the Chairman of the CHR’s 42nd session, condemning the nomination of ex-Nazi Byelorussian, Dr. Hermann Klenner, as one of three vice-chairmen. Our 1st oral statement (12 February) condemned the ongoing Orwellian UN General Assembly Resolution 3377, voted on 10 November 1975 (37 years after the evil 1938 Kristallnacht), equating Zionism with Racism. Our 2rd oral statement (3 March) dealt with the question of “fanatical fundamentalists preaching jihad actions of international terrorism against their sworn enemies: either Muslims, referred to as ‘heretics’; or non-Muslims, referred to as ‘infidels’.” Our 3rd oral statement (7 March), inter alia, dealt with the situation of dhimmis (Jews and Christians in Arab-Muslim lands), providing full details on this historical phenomenon, which slowly emptied ‘Arab lands’ of its ancient Jewish populations — from time immemorial — numbering over 900,000 in 1948 and under 20,000 by 1986; today they are less than 5,000 (barely ½ of 1%).

Madam High Commissioner, we are providing these ‘details’*, in order to stress that for 25 years we have reminded the CHR (and since 2006 the HRC), to no avail, of that commonplace saying: “after Saturday comes Sunday”: i.e. after the dhimmi Jews will have been expelled from Arab lands, it will be the time of the dhimmi Christians. Alas, the ‘international community’ has shown no interest in “Jewish refugees” from Arab-Muslim lands (representing about ½ of Israel’s Jewish population of 5.5 million) — only in “Arab-Palestinian refugees” from UN mandated Palestine, whose tragic plight resulted from the Arab League’s 1947 “no!” to international legality and its military attack to destroy Israel. This refusal then to recognise a Jewish State continues today.

The grave human tragedy of the Christians in the Middle East, particularly in Iraq, has worsened dramatically since our joint 2008 and 2009 Christmas Day Appeals to you, UNSRs, and at UN bodies. We are enclosing again our last year’s joint Appeal and a recent article by a Qatari liberal, Abd Al-Hamid Al-Ansari: “The Perpetrators of the Massacre at the Baghdad Church are ‘the Children of the Culture of Hate.” [Al-Jarida-Kuwait, 15 Nov. 2010, tr. by MEMRI, Special Dispatch 3473, 27 Dec. 2010].

This ‘writing on the wall’ has been evident for decades to all with eyes to see and ears to hear. On the eve of the New Year, we call on you as HCHR, on concerned SRs, and UN bodies to strongly condemn this atrocious martyrdom of a religious-ethnic community, dating from the birth of Christianity in the Middle East. There are less than 10 Jews in Iraq from over 140,000 in 1948. If the UN does not act decisively, the 1¼ million or so Iraqi Christians a decade ago (now under ¼ million) will be reduced to mere thousands or hundreds and all their possessions confiscated, as happened to the dhimmi Jews. The plight of Egypt’s Copts for decades is another neglected tragedy, totally ignored by the OIC, itself. The HRC is following the CHR — and the UN is suffering irreparable damage to its reputation in all fields: “for yielding pacifies great offences.” NOW is the “time to speak” — and not “a time to keep silence.”