Skip to content
Home
/
2010
/
November
/
18
/
Uncategorized
/
NOW THE US GOVERNMENT IS CONSIDERING WHETHER TO ALLOW MUSLIMS TO PAT THEMSELVES IN AIRPORT SECURITY……
Facebook
Twitter
Google+
LinkedIn
Pinterest
I told you, from the very beginning these machines were first talked about, they end up being used on the people who were never envisioned to be a threat, and the people who are a threat, due to political correctness, will get a free pass.
Nope, using a profiling system, these are the very people who should be given intensive, one on one conversations, and if they trip up themselves up by giving any kind of inconsistency in their stories, then they are to be strip searched. Plain and simple. KGS 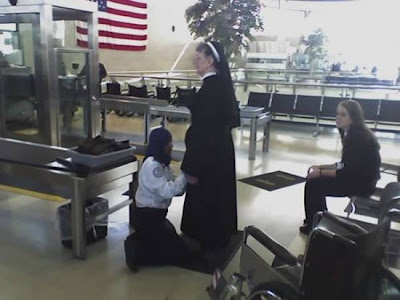 With the holidays fast approaching, the Transportation Safety Agency has announced new security procedures requiring passengers selected for secondary screening to go through a machine that produces a full body scan producing a nude but grainy, black and white image. Passengers choosing to opt out of the scan will face a full body pat.

The head of Homeland Security has indicated the government is considering the request of an Islamic organization that has suggested Muslim women be allowed to pat themselves down during a full body search that is part of new enhanced procedures at airports.

Since implementing the procedures, numerous complaints have arisen that the search is not a “pat-down” but rather feeling and grabbing along a person’s genitalia and other areas until they meet resistance. Critics have said the pat-downs would be considered sexual assault if performed elsewhere.

The TSA defends the procedures as necessary in light of last years “underwear bomber” and the recent issues involving printer cartridges being used in an attempt to blow up cargo planes.

The Council on American-Islamic Relations, CAIR, has expressed concern with the TSA over the regulations and recommended special procedures for dealing with Muslim women. The organization issued a travel advisory for Muslims over the procedure.

In the advisory CAIR advises all Muslims to contact them and file a complaint with the TSA if they experience any “disturbing incidents” with the new procedures and they feel they have been unfairly singled out for screening.

It goes on to make special recommendations for Muslim women wearing a hijab covering their face. The advisory says women are to inform the officer they are only to pat down the head and neck and says “They should not subject you to a full-body or partial body pat-down.” They also recommend that women should be permitted to pat themselves down and “have the officers perform a chemical swipe of your hands.”

Barack Obama’s Homeland Security Czar, Janet Napolitano, is considering changes to the procedures to address the issues raised by CAIR.

Since announcing the rules, several organizations have expressed concern over the procedures. Pilots and flight crews have expressed concern about constant exposure to the low level radiation generated by the machine, but the government denies any danger from having the scan done. The U.S. Airline Pilots Association has issued instructions to members to call in sick and not board a flight if they are too upset to fly after a pat-down. The Allied Pilots Association has urged members to boycott the body imaging machines.