Skip to content
Home
/
2010
/
November
/
16
/
Uncategorized
/
SWEDEN DEMOCRATS SOUND WARNING OVER SWEDISH GOVERNMENT INTENTION TO FURTHER TRASH ITS CONSTITUTION…….
Facebook
Twitter
Google+
LinkedIn
Pinterest
This is to be understood in light of yesterday’s post about True Finns, Timo Soini sounding the alarm over the EU’s federalist intentions. The Swedes appear, at least the main parties do, to be more than happy in relieving themselves of all sovereignty. Which can be symbolized as their  taking a piss on their own constitution. Traitorous is too soft of a term for such actions. KGS 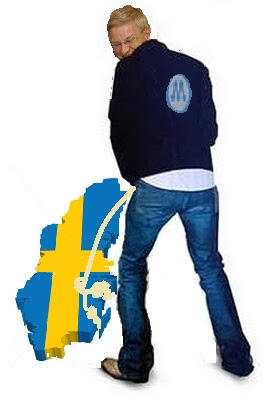 On 24 November, it is planned that all parliamentary parties except the Sweden Democrats will vote for comprehensive changes to the Basic Law carrying strong negative impact on Sweden (Government Bill 2009/10: 80 / / 2009 / 10: Ku4).

Since Sweden joined the EU in 1995 there has been a marginalization of parliament and a depletion of popular government and the state of affairs has been compounded for each Treaty revision has been made since then – the Amsterdam Treaty, Nice Treaty and later the Treaty of Lisbon.

With the Lisbon Treaty having precedence over EU law formally Sweden’s constitutional laws. The past case law to Union law has an explicit priority over national laws treaty attached.

With the new clause introduced by the constitutional amendments will be Sweden’s EU membership and the Lisbon Treaty Constitution protected. It was the Treaty of Lisbon as the center-right alliance parties and Social Democrats voted for in parliament November 20, 2008 without consulting the Swedish people in a referendum. If parliament now votes for amendment to the constitution it commits a further betrayal of the Swedish people.

Neither the EU nor multiculturalism has a sufficiently strong support in Sweden that these phenomena should be supported in the Swedish constitution. Nor do Swedish people look favorably on the fact that our citizenship is eroded and the foreigners to a far greater degree will be able to enjoy the rights previously reserved for those who have Swedish citizenship.

The SD are now initiating an effort to collect names from all those who want Parliament to reject the proposal at Nov 24.