Skip to content
Home
/
2010
/
November
/
16
/
Uncategorized
/
THE NAZIS LEARN FROM ISLAM’S PROPHET MOHAMED…….
Facebook
Twitter
Google+
LinkedIn
Pinterest
I gave Vlad (pbuh) the heads up on this ingenious parody, and he headlined it in the following way:  The Sacred Church of 88. Using the same logic of the modern day Islam apologists, Vichy France was the “golden period” in French history. KGS 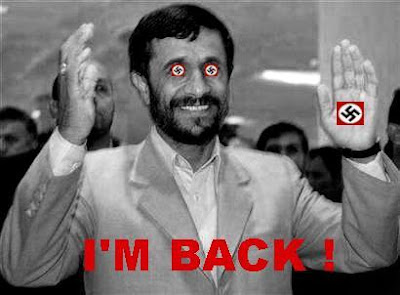 The Church of Adolf Hitler (pbuh); …formerly known as the Nazi Party

I am writing on behalf of the Church of Adolf Hitler (pbuh), formerly known as the Nazi Party.

Having decided to transform ourselves into a religion, we have abandoned all political ambitions, and intend to concentrate on our objectives of spiritual tranquillity, non-violent world conquest and peaceful extermination of the Jews.

Since we are now a religion rather than a political movement, we demand the following rights and privileges:

– An end to Naziphobia in the media, especially war films showing the Nazis in a bad light.

– Destruction of all blasphemous cartoons of Adolf Hitler(pbuh) produced in the Second World War.

– An apology from the British government for the Naziphobic campaign waged by Winston Churchill, and the hurt feelings inflicted on the Afrika Korps at El Alamein by the Naziphobic bigot Montgomery.

– An apology from the American government for the insensitivity by the raging Naziphobe Eisenhower for failing to forewarn Nazi community leaders of the D-Day attack, which caused much distress among the peaceloving Nazis occupying Northern France.

– Application of our parallel legal system known as ‘The Gestapo’ within westerm countries.

– Affimative action to promote Nazis to high positions in the security services to maintain community cohesion.

– The occasional Blitzkrieg invasions of sovereign states should not be portrayed in the media as being typical of Nazis as a whole, rather they are the work of a tiny minority of extremists who have hijacked a peaceful spiritual movement.

Peace in our time and Heil Hitler!

NOTE: VLAD adds: “And just in case any readers are unable to realize this is making a point about Islam, and that this site is not actually a Nazi one or in any way Nazi supporting, I suggest those of you that cannot recognize it immediatly liquidate all your assets and go open a North Korean Restaurant somewhere downtown. I’m sure that all your communist buddies would be happy to eat there rooting through garbage cans in the fashion of authentic North Korean haute cuisine.”