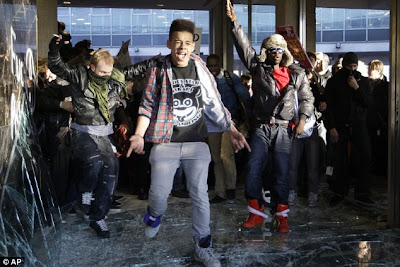 The radical Left has always had the propensity for violence and mayhem in general, it’s their signature characteristic, everyone knows that it’s true. Yesterday’s mass riot at the conservatives headquarters organized by the NUS (Nation Union of Students, because we all know that students need a union. Eye roll) was no different, and shows to some degree the union that exists -not about the one that exists between the students but- between the myriad of different radical Leftist groups that come out of the woodwork during these kind of arranged events and show their true colors.

The thuggish “Anti-Fascists were seen flying their emblem above the Tory headquarters yesterday after they broke through the windows and doors of the building and made their way to the roof, see the following picture. 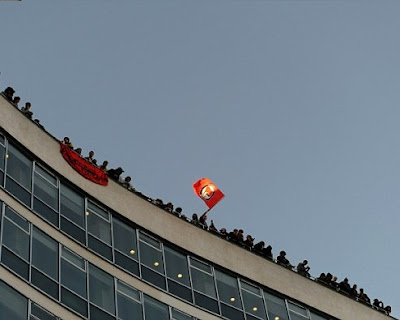 These Leftists form the backbone of the violent “Leftist jihad”, the war that exists between themselves and whoever they deem to be the enemy. Like radical or fundamentalist/traditional  Islam, the Leftist jihadis, aim their fight against the “capitalist West and its institutions, while oddly at the same time, embodying a gross and weird sense of entitlement that’s expected to be delivered from the same system they’re busy trying to rip apart. 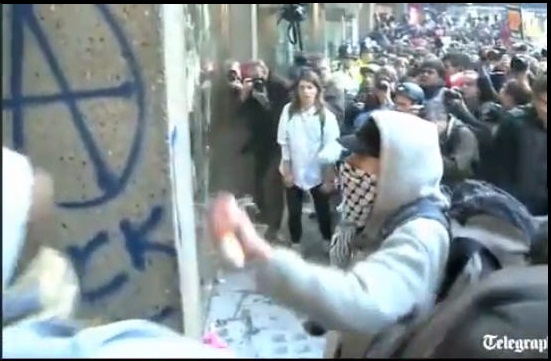 Here’s a picture of “one of the gang” (with an Arab keffiyeh) busy spray painting either the Anarchist or Anti-Fascist logo on the side of a column of the Tory’s headquarter building. The overall distinction between the two doesn’t really matter much, when one takes into consideration that both groups aim for the dissolving of state institutions as they exist, and both are statist in thinking and in deed. If the student pictured is indeed an anarchist, he’s for state largesse, if he’s an Antifa member, he’s for anarchy and state largesse. Plus he’s Islam friendly.
The thin red line that bands these whacko-types together is socialism. Though an avowed anarchist would deny it, but when going through how they think, statism, socialism is their cup of tea, they just want to be on top directing it. So in the end, they’ll chuck anarchy out the window if they ever achieve their aims, because hey, someone has to direct the anarchist state, right?
Here’s a video captured by Vlad of yesterday’s violence, notice the signs of the A in the circle and socialist worker’s Stop the Education Cut signs, they all work together, they live and breath the same rotted air of statism. Funny that they uprising against a system of government that allows their nanny state to exist. Talk about spoiled brats. KGS
NOTE: Please click here for the Gates of Vienna’s rundown on these groups, the Baron gives a very good report on who they are and what they’re up to.