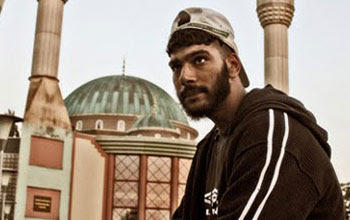 Mosheb: The Dutch courts upheld my ‘artistic license”
so I can fantasize on CD’s about murdering Wilders
This sick bastard should be behind some very thick walls swinging a sledge hammer to make small rocks out of big ones. What the Dutch court has done with verdict, is open the doors for every fundamentalist Muslim to wage war on Geert Wilders, giving a both a wink and a nod and tacit approval. Sick, and they dare bring Wilders up on charges on incitement for showing both a video of Muslim extremism (Fitna) along with their holy texts that they quote while carrying out their acts. What a sick bunch of judges, corrupted to the bone. KGS

THE HAGUE, 11/11/10 – The appeal court in The Hague yesterday acquitted a rapper of threatening Party for Freedom (PVV) leader Geert Wilders because it did not consider the text of his song constituted an offence.

In the number, the rapper constantly alternates threats with mitigating words. “Geert you would be better to jump off the roof, or would you rather have bullets in your body? I am no terrorist, am an innocent rapper. This is a warning!! Do you want to stay alive? Then you must take back all your statements (…) Listen Geert, this is no joke, last night I dreamed that I had cut off your head.”

Wilders launched proceedings against the song in 2007, after he had heard and seen the clip on the Internet. A lower court convicted Mosheb, but the appeal court arrived at acquittal yesterday.

According to the appeal court, the text is not in itself a punishable offence. The track is punishable however in the way it was to be seen on Internet site YouTube. There, gunshots were also heard.

These shots cannot however be heard on the rapper’s original CD version. The appeal court concludes that it cannot be established whether the shots were added by the rapper or by someone else.