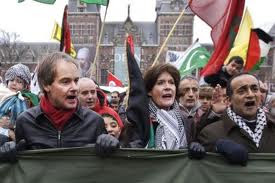 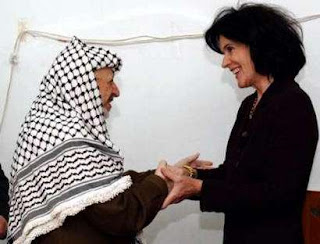 Greta Duisenberg never met
an Islamonazi she didn’t like
Yes ladies and gentlemen, this woman highlights the fractured mentality of the Left. They have no problem at all in prosecuting the truth tellers like Geert Wilders, Jussi Halla-aho, Mark Steyn and Ezra Levant,  Elisabeth Sabaditsch-Wolff and host of others fighting to maintain our free societies, but those who yell death to the Jews, well, they get a free pass.
Remember, it’s anti-Semites like Greta Duisenberg in the Netherlands and Richard Järnefelt here in Finland, who know how to cry a well full of tears at the mention of Holocaust in proving their “philosemitic credentials”, but when it comes to the world’s only Jewish state, they throw it under the bus using the exact same, brain dead logic, as the other anti-Semites in Hamas, Hezbollah, in Tehran, Riyadh and in the highly anti-Semitic OIC.
Greta Duisenberg is just one more disgusting voice on the Left that remains un-challenged and un-rebuked by her peers for her anti-Semitic tirades. In fact, she’s made into a Cause célèbre  for her outspokenness in being against the Jews in Israel. Disgusting. KGS

Gretta Duisenberg Is An Anti-Semite

For those who believe that Islam is a peaceful religion and that its adherents and leaders are also peaceful; and for those who do not believe that a Western-Islamist alliance is well underway with the power to destroy Western civilization—please explain to me why Gretta Duisenberg, the widow of Wim Duisenberg, the former president of the European Bank, is now suing my friend and colleague the eminent Iranian-Dutch professor of philosophy and jurisprudence, Afshin Ellian, for calling her an “anti-Semite,” when she proudly calls herself an “anti-Semite.

Abigail Esman, writing in Forbes and Leon de Winter writing in Elsevier, both explain that Ellian is now facing the kind of criminal charges that have kept Geert Wilders in the dock for many costly years. Duisenberg has not been charged under Dutch hate speech laws for marching in an anti-Israel parade and chanting “Hamas, Hamas, Jews to the gas.” Duisenberg is the chairwoman of a pro-Palestine committee (“Stop the Occupation”) and has said that Israelis are kidnapping Arab boys, removing their organs (!), and then returning them to Gaza.”