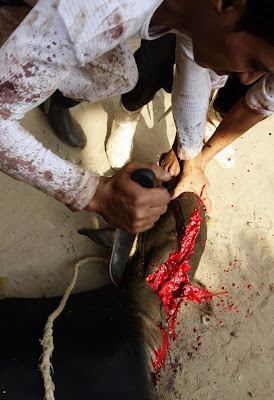 No matter how you slice it, Halal slaughter/butchery industry is being promoted as a big money winner, as long as Europe keeps butchering its own culture and identity that is. KGS

ROME, NOVEMBER 9 – From Malaysia to the United Kingdom, there is great attention to the world of halal, a global market worth 634 billion dollars and an annual rate of growth of 15%. These numbers have drawn in operators, businesses and government agencies, which are attracted by a potentially vast market that is strongly rising. Halal products (goods that correspond to Islamic precepts) do not only attract followers of Islam, but also non-Muslims, and the interest is spreading from the more traditional areas to the heart of Europe.

The second edition of the World Halal Forum Europe gets underway in London today, a two-day event focussing on the opportunities offered by the sector, not only in the food industry, but also in cosmetics and tourism, with analysis of newly available products and of appropriate European legislation. Large-scale distribution chains have been aware for some time that halal is an important new trend in the food trade, but fast-food multinationals have also been alive to the fact, as shown by recent initiatives by two giants of the sector, Quick and KFC.

The aim is to meet the needs of consumers who, according to some estimates, are set to grow by 20-25% in the next decade. There are a number of factors behind these results, including the increase in spending power within Europe’s Muslim communities, which is due to “the increase in the level of education and of living standards,” according to Datuk Hussein Haniff, the Malaysian ambassador to the EU, who recently spoke to the International Conference on Halal Food in Brussels.