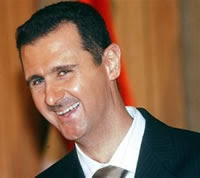 In the complicated realm of the Middle East, Syria plays a central role. Giyus.org sat down with Professor Eyal Zisser, an expert on the modern history of Syria and Lebanon, to get a better understanding of Syria and the way it uses terror to advance its political goals in the region. Prof. Zisser is the head the department of Humanities Studies in Tel Aviv University; he is a frequent speaker and writer on this subject.

Giyus.org: What’s Syria role in the region and how is it impacted by the rising power of Iran?

Professor Zisser: Syria has a central role in the Middle East. First of all, it has a central geographic location practically at the heart of the region. Secondly, Syria borders Israel and plays a major part in the Arab-Israeli conflict. Its conflict with Israel allows Syria to maintain close relationship with Hamas and Hezbollah and help them out.

The Assad family has been in power since 1970. During this period Syria became a stable country, strong from the military and political perspective. Syria is involved in Lebanon and with the Palestinians, but most of the attention it gets from the Western world is due to its close ties with Iran.

This Syria-Iran alliance allows Iran to benefit from Syria’s central location and provides a gateway for Iran to Israel’s immediate vicinity. Syria, on the other hand, benefit from the rising power of Iran. By partnering with Iran, Syria seems stronger in the eyes of the West.

Giyus.org: Iran is ruled by a deeply religious Islamic regime, while Syria is completely secular – does that impact the relations between the states?

Professor Zisser: At the moment the political gains for both countries outweighs the religious differences. In the long term this is definitely an issue that can cause tension between Syria and Iran. However, since this alliance was forged 30 years ago, both countries have dealt with much greater threats to their existence so it is in their best interests to partner and over look the religious issue.

Giyus.org: What are some of the major threats facing Syria in recent years?

Professor Zisser: The list is very long. In the 80s Israel entered Lebanon in the first Lebanon war. This then created problems in Lebanon, the front yard of Syria. This last decade since September 11th attacks was marked by the war on Terror. Bush invaded Iraq and was considering an invasion to Syria as well.

In light of these threats Syria needs Iran as an ally to back her up. In the eyes of Syria, Israel and the US are a strategic threat, much more so than Iran.