Skip to content
Home
/
2010
/
November
/
8
/
Uncategorized
/
CHRISTIANS INVITED TO FLEE IRAQ AFTER MASSACRE IN BAGHDAD’S LARGEST CHURCH…….
Facebook
Twitter
Google+
LinkedIn
Pinterest
This story reminds the Tundra Tabloids of the macabre symbiosis that exists between Christian and Muslim communities in many of the extreme areas of the world, where the former preaches “turn the other cheek”, and the latter happily obliges them. The Tundra Tabloids advice, get out of that hell hole. These are the people that should be allowed to immigrate into the West. KGS 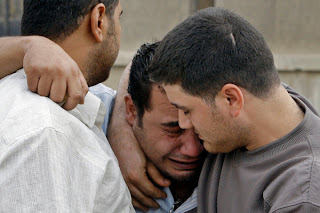