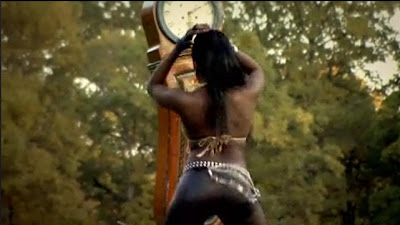 A woman “shakes it up” in front of a cultural symbol found in
many Swedish homes, or should I say used to be found.
This anti-Swedish video happens to be one of the more poignant reminders of just how far the state of Sweden has fallen in its long history, after the socialists got ahold of it for over 40 some years. The denigration of its own culture, the stripping and jettisoning of its own national identity, coupled with the purposeful, massive influx of muslim/immigrants that is radically changing the demographics of Sweden to a point of no return, has been the stated policy of successive socialist governments, and not too much has changed since the “conservatives” have come into power.
The Tundra Tabloids suggests to those who might be offended by scenes of copulation and gyration to skip watching the video, but to the more thick skinned, watch this video that Kitman kindly captured and youtubed. It’s a still-shot moment in Swedish history symbolizing the policies of the traitorous self anointed elites having another go at Western civilization, piece by piece. KGS

NOTE: Tell the Tundra Tabloids what you think, as an indigenous group, don’t the Sweden Democrats have a right to stick up for their own culture and identity?