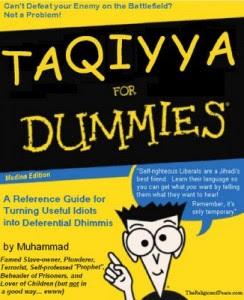 And predictably the Left goes bonkers. The woman is not saying that all Muslims use the precept of “taqqiya”, but that it is indeed a valid precept within Islam and can be used by those who follow every word of the Koran, so be aware of it. Just scroll down the Tundra Tabloids side bar and watch the youtube video of an Islamic scholar who talks about the present day usage of the precept.
Taqqiya is more widespread than one would imagine, regardless of what the Danish “islamic scholar” professor of Islam, Maurits Berger, says. One only needs to spend some time in the Middle East and engage in conversations there with the locals to find out how much the art of lying is an ingrained trait.
The Tundra Tabloids recalls an interview of a US contractor in Iraq a few years after the fall of Baghdad, and as I recall, the man was bewildered over the lies being told by the people he was in contact with over every simple thing. He could never get an honest reply about anything. KGS

AMSTERDAM, 02/11/10 – The Party for Freedom (PVV) has added a new word to Dutch vocabulary: takiyya. It says it is an Islamic rule that allows Muslims to lie to non-Muslims.

In his recently-published book, PVV MP Martin Bosma describes takiyya as “lying to strengthen Islam.” It amounts to Muslims being able to present themselves as liberal and modern, while secretly working on the introduction of the Sharia.

In a debate last week, GroenLinks leader Femke Halsema accused PVV leader Geert Wilders of making all Muslims suspect with the reference to takiyya. Wilders advised her to seek information from Islam experts.

If Halsema were to go to Maurits Berger for advice, she would not be convinced of Wilders’ views. The professor of Islam in the present-day West reacted angrily to the PVV message in De Volkskrant newspaper yesterday.

“How dare Wilders throw around Islamic terms about which he does not have a clue? Takiyya is a concept from the Middle Ages. It infuriates me that such a dogma from the past should be stuck onto the Muslims of today. It is as if you claimed that Christians think women who stay afloat are witches.”

The concept of takiyya appears in the Koran. “Only among extreme groups does this secrecy still do the rounds,” according to Berger. He considers it a “complete scandal” that Wilders and Bosma have introduced it. “This is manifest incitement to hatred.”

NOTE: No where in the New Testament does it give any Christian the right or permission to drown witches. It’s a big difference that Berger fails to grasp.