The Muslim knows who to target, the traditional weak minority, whether it be Jews or Christians, they are both deemed fair game. This has everything to do with Islam. KGS 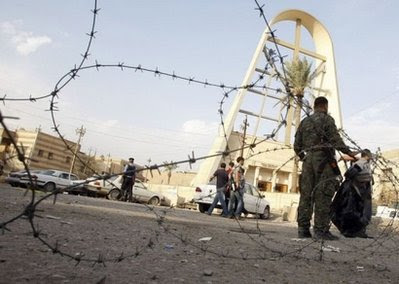 BAGHDAD (al-AFP) – Thirty-seven Christians including two priests were killed when US and Iraqi forces stormed a Baghdad cathedral to free dozens of hostages being held by Al-Qaeda gunmen, witnesses and officials said Monday.

The bloodshed, in which seven security force members were also killed, came after the gunmen raided the Sayidat al-Nejat Syriac Christian cathedral in Baghdad’s Karrada district during evening mass on Sunday.

A witness said the attackers immediately shot dead a priest on entering while worshippers huddled in fear.

“They entered the church with their weapons, wearing military uniforms. They came into the prayer hall, and immediately killed the priest,” said one of the freed hostages, an 18-year-old man who declined to give his name.

“We heard a lot of gunfire and explosions, and some people were hurt from falling windows, doors and debris.”

Traces of Flesh, blood, bullet marks and shattered glass littered the cathedral, said an AFP journalist who went there Monday.

“It resembles a battlefield,” he said.

The attack was claimed by an Al-Qaeda group.

The gunmen had attacked the cathedral after killing two guards at the nearby headquarters of the Baghdad stock exchange.

Among those killed in the carnage were five women, seven children and two priests, an interior ministry official and witnesses said. Ten women, eight children and a priest were among the wounded.

Five attackers were killed and eight arrested, the official said, adding there had been more than 100 worshippers at the cathedral in central Baghdad when the gunmen stormed in.

Witnesses said the hostages crowded into the main prayer hall when the gunbattles began with security forces.

The Chaldean bishop of Baghdad, Bishop Shlimoune Wardouni, said that two priests had been killed, and one shot in the kidney.

“It’s a great sorrow, because this was an inhuman act. Even animals are not doing this to each other,” Wardouni said.