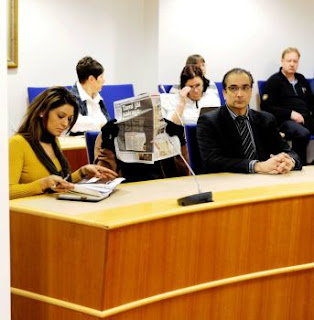 Last year, when the story broke about the murder of an ethnic Pakistani woman who divorced her husband, (also from Pakistan), the Tundra Tabloids reported that the Finnish police and prosecutor were treating the crime as just a homicide, void of any outside Islamic  influence. Well it’s now obvious that the prosecution has changed its mind. The murder by the 35 year old Pakistani defendant was described as “a very premeditated, raw, ritual slaughter”  with the perp getting a life sentence, by the Lappeenranta court. A life sentence in Finland means a minimum of 11-12 years in jail. KGS
NOTE: This report in Finnish, states that he got life, or at least 11 yrs.
Verdict expected today in the murder of a Pakistani woman

A former spouse accused of killing an ethnic Pakistani woman (sitting in the middle behind the paper) will receive the verdict today. On the left is his translator, Riti Sandu, on the right  his lawyer Heikki Lampela.

The handling of the case that happened less than a year ago in Lappeenranta, will come to an end today in  the South Karelia, district court.

The last time the issue was discussed in the District Court was in April of last year. The convicted man was sent by a state at the time, to a mental facility for study.

It is a story in which the victim, a 34-year old Pakistani woman was living in Finland. The killer was the woman’s ex-spouse, who also was born in Pakistan. They had been married during the  years 2005-2007.

According to Defense lawyer, Heikki Lampela, it was just an act of murder.

After the murder, the killer tried to escape from Finland, but the police arrested him at the Helsinki-Vantaa airport.