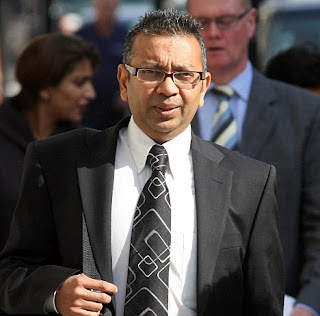 Milan Shah: It never occurred to me that,
she would actually record my advances
Dentist offered to give me a discount if I slept with him
A mother-of-five yesterday spoke of her trauma after her dentist pestered her for sexual favours in return for discounted treatment. Chammelle Courtney’s world had been turned upside down after her husband Mark suffered an asthma attack which stopped his heart and left him badly brain damaged.

But shortly after the 36-year-old lorry driver was admitted to a nursing home for round-the-clock care, dentist Milan Shah propositioned her. Bombarding her with calls he told her: ‘You are not getting any loving from your husband and I am not from my wife. Maybe we can help each other out.’

After falsely telling Mrs Courtney, an NHS patient, that she had to pay for two root-canal operations privately, he offered to reduce the price if she would ‘spend some time with him’. The 37-year-old, who has decided to waive her anonymity to help others who may be suffering in silence, told how police refused to deal with the case because they said there was a lack of evidence.
Two telephone conversations in which Shah, 43, tried to persuade Mrs Courtney to drop an official complaint were said to be inadmissible in a criminal court as he did not know she was recording them.
But they were accepted by the General Dental Council – and after a hearing last month, the dentist was struck off. Shah, who is married, had taken Mrs Courtney’s phone number from records at Alexander House Dental Practice, in St Albans, and began calling her at weekends.