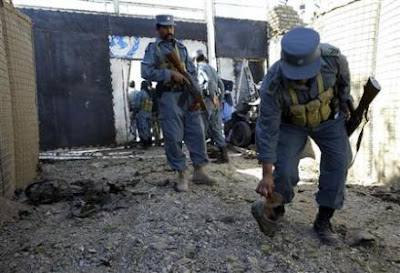 The attack with rockets, machine guns and bombers hit the U.N. compound in Herat, a commercial hub and the largest city in the country’s west where Taliban and other Islamist insurgents are usually less active than in other areas.
Afghan forces and U.N. security guards at the compound repelled the insurgents. Two attackers, including a car bomber, blew themselves up at the entrance and another detonated his bomb just inside, while a fourth was shot and killed, police, government and U.N. officials said.
It was the highest profile attack on the United Nations since last year and will raise questions about security in a city that NATO officials believe could be among the first to see Afghan forces take responsibility for security from NATO troops.
More here.