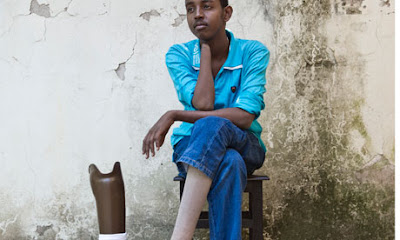 Double cross amputee, Abdulle
Read how The Guardian spins the Islamic sharia influence on the amputation: “His story offers a rare insight into how the Shabaab is using its extreme interpretation of Islam to establish order through fear – and to find recruits.”
Folks, it’s Islam 101, pure and simple. The more “Islamic the society” the more likely this kind of gross, 7th century type barbarism will be put into practice. Remember, these practitioners of traditional Islam have over a thousand years of religious/political precedent to bolster their views, as Robert Spencer reminds, that all the schools of Islamic jurisprudence teach some of the most barbaric interpretations of the Koran and hadiths and Sunnah of Mohamed.
Here is the morbid story as relayed by the hard British Leftist paper, The Guardian. 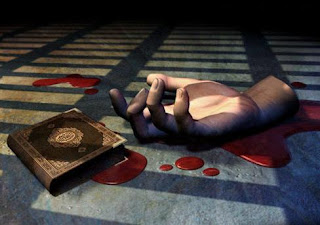 The Guardian: In the middle of the stony parade ground were about 20 militiamen in green fatigues. Their faces were masked. They were wearing surgical gloves. On the ground was a single plastic mattress.
Abdulle says he was made to lie down. His left hand was tied to his right ankle with a thick rope, leaving the other limbs free for what was to come. Rubber surgical tubing bit into his right biceps – a tourniquet. One rebel grabbed his hand, another his forearm. They pulled in opposite directions as a piece of plastic was laid over his wrist.
“Please make it quick,” he pleaded.
A heavily built man drew a large wooden-handled knife normally used to slaughter camels. The knife descended.
Though their horror was far from over, Abdulle and the three other young men “cross amputated” – a process of cutting off a hand and foot from opposite sides of the body – by the Shabaab on 26 June 2009, eventually escaped from their Islamist captors, and managed to cross to the government-controlled side of the city. Abdulle recently managed to flee Somalia, and reach a safehouse in Nairobi, Kenya, where he gave this interview.
More here.